As the sequel to Famicom Jump: Hero Retsuden, the game is a crossover of 7 different Jump titles, including JoJo's Bizarre Adventure. The player takes on the role of one of seven characters, gathering the other six while traversing their individual scenarios. Only aspects of the game relating to JoJo's Bizarre Adventure will be covered in this article.

The other characters don't show up outside of Jotaro's scenario, though they do reappear to help at the very end of the game.

Jotaro Scenario: When Jotaro travels to Sutangari Town, he discovers that the town residents have been turned into stone statues. After a long search, Jotaro finally discovers the Stand User culprit in a nearby cave and manages to beat him with Star Platinum. When the Stand User is defeated, the people affected by his Stand's power return to normal.

Another Heroes Scenario: The scenario is similar to Jotaro's scenario, though the story is seen from the hero's perspective. After witnessing the fate of the people in Sutangari Town, he finds Jotaro in an oasis, whom leaves the place in search of the culprit of that situation. The hero follows Jotaro and faces a generic enemy with the same sprite of "Stand User". When he finds Jotaro again, he manages to observe the fight between him and the User. When Stand User is defeated, the people affected by his Stand's power return to normal. 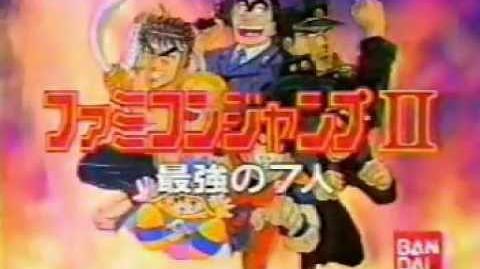 Retrieved from "https://jojo.fandom.com/wiki/Famicom_Jump_II:_Saikyo_no_Shichinin?oldid=296613"
Community content is available under CC-BY-SA unless otherwise noted.