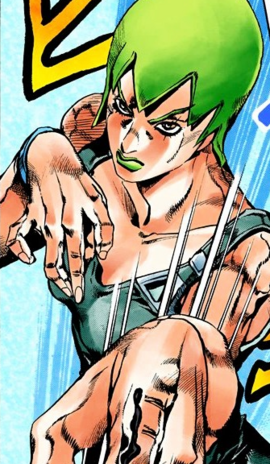 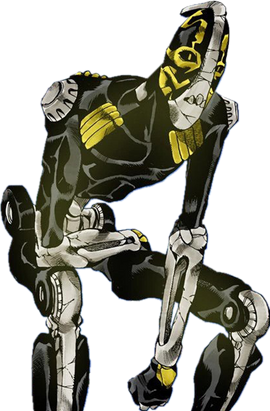 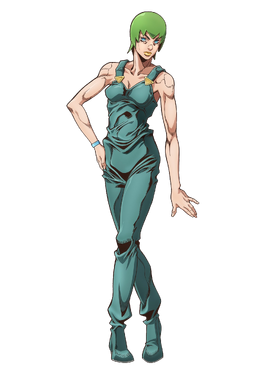 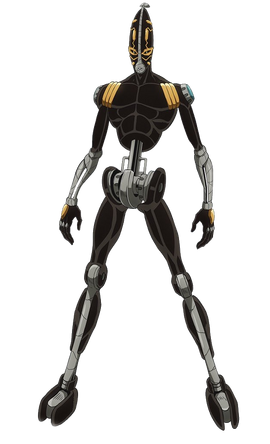 Fatal injuries and loss of Stand disc via Enrico Pucci

All Star Battle
This article is about the character. For this character's Stand, see Foo Fighters (Stand).

F.F. is a mix of Stand and Stand User; A colony of plankton that is organized, maintained by, and essentially equivalent to the Stand, Foo Fighters. At first serving Enrico Pucci/Whitesnake, they soon ally themself with Jolyne Cujoh out of gratitude for being spared.

F.F. can change their appearance at any time. However, their habitual appearance is that of the prisoner Atroe, a woman of average height and slim build with hair or a cap covering her head in a mop or bob forming a serrated edge at its ends.

As their body is composed of plankton, F.F. can contort into impossible curves and even slip through barred fences unharmed. The bodies that they can form into are their sub-body, which they take the form of when initially fighting Jolyne and Ermes, and the main body, which they take the form of outside the water and when they have collected enough plankton. The bodies they have taken over were the three unnamed prisoners, including Atroe.

F.F. is commonly shown carrying a 32 oz. cup near themself when they are not near a water source.

In their Stand form, Foo Fighters takes two main appearances. Naked, a tall, dark, robotic humanoid of masculine proportions, and an alien visage. As F.F.'s identity develops due to their experiences with Jolyne, the true form of their Stand takes on a more human appearance starting to resemble the body they took over while still retaining some of the features of its older form.

Foo Fighters is originally portrayed as an obedient minion whose sole purpose was to fulfill Pucci's orders. After meeting Jolyne, they begin to grow a sense of individuality throughout the story.

Foo Fighters' personality hinges on the fact that they possess "intellect" but little life experience. During their introductory arc, their only goal is to preserve themself which includes obeying Whitesnake's instructions to guard the discs.[4] As their guardian, they attack people very ruthlessly and aims to kill anyone approaching the disc's hiding place, regardless of their threat level. Being an intellectual being, Foo Fighters places great importance in themself and will implore their enemy to recognize them as sentient by calling them by their name.[5] They also quote the astronomer Fred Hoyle to claim an "intellect" is guiding the universe, even predating it, all to say that even plankton can be intelligent.[6] When Foo Fighters dies, Jolyne meets their ghost for a short time and the former mass of plankton happily contemplates their spirit form that confirms that they were truly alive and sentient.[7]

However, when Jolyne shows mercy toward them and saves them from dehydration, Foo Fighters discovers another way of thinking and grows interested in her, pledging to protect Jolyne and accompany her from now on disguised as the prisoner Atroe.[8]

Foo Fighters was shown not to have much of an eye for detail prior to meeting Jolyne Cujoh and Ermes Costello and laments their existence upon expecting death after being defeated by the two. When Jolyne saves them, however, F.F. immediately begins to notice more details around themself and comes to perceive the world around them as being more colorful. As a result of experiencing this whole new environment, they become extremely curious about everything around them, constantly asking questions to people and experimenting with the world, for instance, trying to do the contrary of what Atroe would have done.[9] While they get along with other people, they have the strongest affinity for Jolyne for giving them freedom and "intellect", of which losing is their greatest fear.

Foo Fighters eventually comes to accumulate enough positive memories of their companions that it comes to value them over their own safety, eventually sacrificing themself to close Anasui's wound with its plankton. Indirectly saving Jotaro and Anasui's, Foo Fighters departs satisfied to be able to salute Jolyne one last time before ascending to heaven.[10]

Because of their great dependency on water, Foo Fighters is obsessed with it and goes to great lengths to constantly hydrate itself. They carry a cup of water and will fight anyone over it, as well as drink any liquid as long as it contains water, be it blood or spit. Being a mass of plankton with no experience of society, they aren't disturbed by any of it.[11][12]

In summary, F.F. is its own Stand and Stand User. It may reconstitute itself, fill and seal the wounds of others with its flesh, as well as project its flesh as bullets, along with rapid regeneration.

Enrico Pucci had a shack of Stand disks near prison grounds, a collection of different Stands that he had collected over the years while in prison. The area around the shack is generally untouched and desolate. Enrico needed a guardian for these disks, lest they fall into unwanted hands. He threw a random DISC into the ocean, which landed in a group of plankton floating on the surface. Unexpectedly, F.F. was born.

F.F. was told by Whitesnake to stay at the shack where he kept the discs and to kill anyone (other than him) should they come close. Having no other purpose, they did as they were told, protecting the discs. When Jolyne and Ermes approached the shack during an outdoor activity, F.F. attacked but was soundly beaten by both of them. Parched and close to disintegrating, they lamented its meaningless life having only lived serving orders under Whitesnake, but was spared by Jolyne, who gave it water, despite Ermes' protests. Fascinated by their savior, it showed Jolyne her father's missing Stand Disc in gratitude. Subsequently, F.F. inhabited the body of a dead inmate and followed both of them back to prison.

After following Jolyne & Ermes back to the prison, F.F. is later seen playing catch with Ermes and Jolyne in the courtyard, with awkward throws. After they get used to it, Miraschon places a wager, to catch & throw 100 balls for $200. They succeed in the bet without repercussions, but Miraschon places an even higher wager, 100 catches for $1,000. This intrigues Ermes, so she decides to throw instead of Jolyne. When they reach about 31, a guard grabs F.F., screaming that outdoor time is over. They throw it anyways after realizing that whatever interferes, they lose the bet. Ermes then bribes the guard, who looks the other way, but he takes away Ermes' glove causing her to drop the baseball. She uses Kiss to bring it back to her, but this is against the rules and Ermes pays for it literally, as Miraschon uses her Stand, Marilyn Manson to collect $380 worth of money, Ermes' gold tooth, and her liver. Jolyne takes her place and raises the wager, 1,000 catches for all that was taken from Ermes. Jolyne and F.F. throw the ball all while chasing down and defeating Miraschon.

Much later F.F. reveals to Jolyne, Ermes' past about her sister Gloria, & her killer Sports Maxx. The two race to find her, only for F.F. to fall victim to Sports Maxx's Stand Limp Bizkit. Later, F.F. heals Ermes & Jolyne, however Ermes' injuries were so severe that she was out of action for a while.

F.F. meets Anasui, who is adamant in finding Jolyne, not for her well-being, but to marry her. As they reach the Punishment Ward, F.F. saves Jolyne from Kenzou and gets into a heated struggle with him.

Later, tricked by Pucci, F.F. leads their friends into an ambush and suffers a severe blow to their body, knocking the Foo Fighters Stand disc from their head. Dehydrated and nearing death, F.F was able to hear the dying request from Anasui. He gave them permission to possess his body to pluck Jotaro's memory disk from Pucci, not caring what happened to him as long as Jolyne would be happy. F.F. did pluck Jotaro's memory disk from Anasui's body but refused to possess it. Their spirit (taking on the form of Atroe's body, due to growing accustomed to it) heals Anasui's wounds and thanks Jolyne for being their friend, glad that they met. When Jolyne decided to retrieve the disk to revive her, F.F. declines, saying that they would not be the original one, but another F.F. and disappears into the wind.

Foo Fighters appears on the PS3 title as a support character for the Campaign Mode, where they appear and gives the player two choices; Either inflict 150 HP to any boss or gain 1 energy bar of health. Foo Fighters is also the only ally-character from Part 6 who does not appear on any interactive form on the match (Both Anasui and Ermes are playable characters and Weather Report and Emporio appear in stages).

Foo Fighters appears in a support card, saying "My healing power can fix you completely, OK? (完全に治すのは自分の治療力! OK?, Kanzen ni Naosu no wa Jibun no Chiryōryoku! OK?)". When applied to the player's team, its members have their HP gradually restored over the course of the fight.

SO Chapter 54 Magazine Cover A

SO Chapter 54 Magazine Cover B

SO Chapter 54 Cover A

SO Chapter 54 Cover B 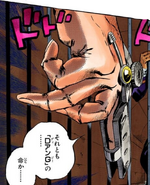 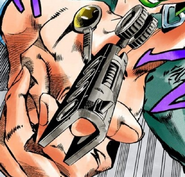 Placing a stand disk in its body's chest 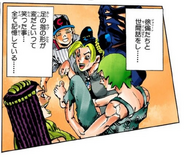 F.F wondering about the speciality of 'catch'

Foo and her friends starting up 'catch'

F.F bringing her attention back to her cup of water

Throwing a baseball in a bizarre fashion 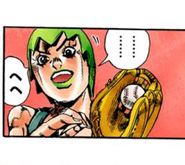 F.F managing to clutch the baseball with her own self

Confirming the return of the intestine (Marilyn Manson)

Foo and her ideal about the flipside of her livelihood

Whats the opposite of pork?

Letting others before her 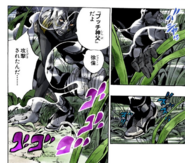 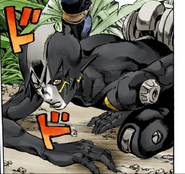 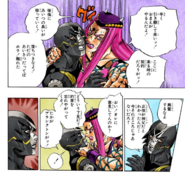 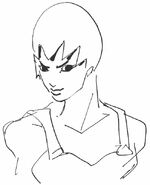