Despite being named after an earth deity, Geb is bound to a small, shapeless mass of water (small enough to hide inside a canteen).[1] It usually takes the form of a tentacle equipped with a clawed hand. The arrangement of the digits is usually that of a left hand.

It represents the Egyptian God GebW.

Befitting its nature, Geb is consistently portrayed in media as blue.

The OVA portrays Geb with a mouth.

Geb's greatest strength is the range at which it can be controlled precisely, enabling N'Doul to sit kilometers away from his target (four kilometers when he attacks the Joestar Group).[2] Combined with N'Doul's ability to sense vibrations from faraway, Geb can reliably act while its user is safe.

It is nonetheless a basic Stand whose dangerousness comes more from N'Doul's skill as a Stand user than its inherent power. N'Doul exploited the surrounding desert to hide Geb under the sand and constantly attack by surprise,[1] thought of creating quicksand with the water[2] and used Geb to propel sand into the air, acting as a sonar to detect the sound of the sand falling on The Fool's glider.[3]

Geb, being a body of water, is completely amorphous and hence is exceptionally flexible and nimble, being able to evade Star Platinum's punch by twisting itself.[3]

Despite being a mass of water, Geb's claw is strong enough to cut flesh, and even ripped a man's head off and pulled it completely into a metal canteen.[1][2] When it propels itself at a high enough speed, Geb can even cut through metal.[4] In addition, the water can act as a hard shield against projectiles.[3]

However, the water is particularly vulnerable to heat, as Magician's Red's flames could partially evaporate it, wounding N'Doul.[4] 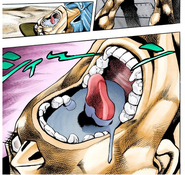 A pilot drowned by Geb

Geb pulling off a pilot's face 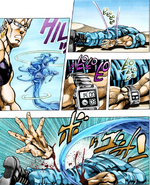 Geb attacks the sound of the pilot's alarm watch 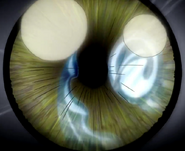 Geb facing off with Avdol

Geb's silhouette, from JoJo Sono Chi no Kioku ~end of THE WORLD~

Geb, as seen in the OVA 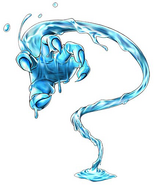 Geb's illustration of Eyes of Heaven