Episode 24 - The Ties That Bind JoJo

He is the son of Jonathan Joestar and the late father of Joseph Joestar. He is also featured in the JORGE JOESTAR light novel.

George resembles his father Jonathan and his son Joseph. He is only seen wearing a military dress uniform. His hair is supposedly short and black.

Assumed to be a capable fighter pilot, George was one of the first to fly an aircraft during World War I. It's hinted that he may have had a talent for the Ripple much like his father and son, though he was never given any training to properly use it.[3]

George Joestar II was born just months after his father died to the eyes of Dio Brando. His mother, Erina, was pregnant at the time of Dio’s assault and raised George primarily by herself. He grew up to marry the child who was saved by Erina at the time. Together, they had a son named Joseph Joestar.

George became a pilot for the British Air ForceW during World War IW. During his service, he discovered that one of his superior officers was a zombie that had been created by Dio and had been living secretly in darkness for years. George went to confront him, but unfortunately, was not trained properly in the art of Ripple and died in the battle. His death was covered as a flying accident. Lisa Lisa mourned his death, causing her to leave the house and kill the officer with Ripple. 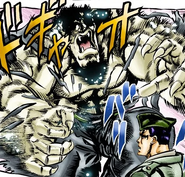 The Officer Zombie lunging at George.

George as a pilot in the British Air Force. 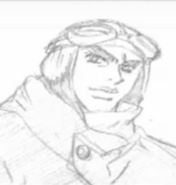 George As He Appears In The OVA's Timeline Videos.

On the cover of Jorge Joestar 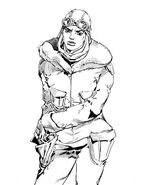 George being mentioned in Stardust Crusaders. (1) 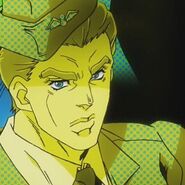 George being mentioned in Stardust Crusaders. (2)