View source
watch 01:36
We're Getting Mutants in the MCU - The Loop
Do you like this video?
Play Sound
SPOILER WARNING: Part 7 Spoiler details may follow.

George is the father of Johnny Joestar and Nicholas Joestar, the former with whom he maintains a difficult relationship. He is a horse breeder by trade.

George Joestar is a mature man of average height who is slightly overweight, having dark hair into a regular cut and a small mustache.

His hair eventually greyed with age.

George is an acclaimed horse trainer.

In the past, he was a strict father to his son, not only having forbidden a young Johnny from bringing an adopted mouse to the table, but then ordering that the mouse was drowned and shown to him. Because he was mindful of his reputation among the British, George was particularly severe when it came to gentlemany manners. George is was shown to be extremely sad and bitter over Nicholas' death. According to Johnny, George would spend the next seven years reminiscing on Nicholas' immense talent while downplaying Johnny's own achievements. It culminated into a fight over Nicholas' old riding boots: when Johnny sought to use them, George refused to hand them over and "insult Nicholas' memory"; when he tripped into a glass cabinet and injured his neck on the glass, he then declared that God took the wrong son, disavowing Johnny and breaking his heart.

George ultimately changed his mind over time. He met his son Johnny in New York during the final stage of the Steel Ball Run, waving Nicholas' boots as a silent gesture of reconciliation. Finally, he publicly declared his shame over letting his son suffer and then his pride in his achievement of having crossed the United States.

George Joestar I was born of a family with ties to the aristocracy which fell on hard times. However, George himself was famous and rich as a horseracer and then breeder, having won the Triple Crown seven times and owning several farms with the facilities to breed racing horses. Although he settled in Danville, Kentucky, he made journeys to England with his family.

George was strict with his sons. When Johnny was five and first rode a horse, George is seen declaring that his son was a genius. However, the rest of Johnny's childhood was marked by a strained relationship as George was unnecessarily severe and overtly favored Nicholas. After Nicholas' death, George was convinced that God had taken the wrong son and took out his sadness and rage on Johnny.

It is revealed in flashbacks that he and Johnny had an intense argument over what should be done with the racing boots of the deceased Nicholas. During this fight, Johnny ends up dealing a severe injury to his father’s head while complaining about the pain and feeling of inferiority that George’s cruel behavior left with him.

George would then disappear from Johnny's life, not even deigning visiting him when his spine was broken.

George reconciles with Johnny, presenting Nicholas' boots to him as he watches the final stage of the Steel Ball Run race in New York. He speaks to the surrounding crowd with passion, confessing his mistreatment of his son. He goes on to mention his current pride regarding Johnny’s ability to traverse the entire continent. This results in an applause from the crowd while George grows tearful and Johnny rides onwards.

George greeting his only son 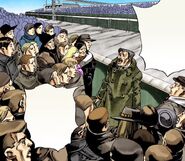