Impaled through the neck by an iron pole via Gold Experience

Ghiaccio is a member of La Squadra Esecuzioni who chases Giorno Giovanna and Guido Mista near Venezia with his cryogenic ice-generating Stand, White Album.

Ghiaccio is a man of below-average height and slim to medium build.

His light blue hair clings to his head in a low number of large spirals, and he wears a pair of thick-rimmed glasses that are broken by Mista during his battle with them. Ghiaccio also keeps a blouse buttoned at the side of the chest and a band patterned trousers. In the manga, he wears brown leather fingerless gloves, while the anime attaches them to his suit and makes them white. Unlike the rest of the Hitman Team, who wear boots or shoes, Ghiaccio wears Sneakers.

Ghiaccio wears his Stand, a light-colored, full-body suit, for the majority of his feature.

Ghiaccio is a confident and short-tempered assassin who, despite his quirks, is rather level-headed.

Wielding the dangerously powerful ice-based Stand, White Album, Ghiaccio is understandably confident in his abilities and disdains most of the enemy's actions, which he deems as futile. Unlike the rest of his teammates, Ghiaccio openly confronts Giorno and Mista alone (having assumed the rest of the team was nearby too) and even openly monologues his plans out loud. Conversely, when the two of them attempt anything against him, Ghiaccio doesn't hesitate to taunt them or ridicule their futile attempts, such as when he tells Mista to jump into the water to see whether he can really outpace White Album's freezing ability, also demonstrating his power by freezing a sizeable stretch of water in an instant. His pride is expanded upon in the anime by showing him claiming that La Squadra Esecuzioni is "the best" out of all the teams in Passione. However, Ghiaccio demonstrates that he isn't simply arrogant and commends Mista for giving him a hard fight despite his weaker Stand.

Although he is extremely prideful, Ghiaccio is conscious about his weaknesses and has devised plans to alleviate his need to have an air hole on White Album. If the need presents itself, Ghiaccio is able to freeze the air to counter against projectiles and cover the air hole. Moreover, on the rare occasion where he is at a disadvantage, Ghiaccio also shows he can think quickly to reverse the situation. For instance, when he is nearly impaled on a spike, Ghiaccio uses his own flowing blood to create pillars and support himself.

He has a fixation with language, whether derived by his own pride or otherwise, expressing annoyance at the confusing wording of nonsensical metaphors as well as how foreign languages do not respect Italian words (such as spelling "Venice" in English instead of "Venezia"). During these fits of anger, Ghiaccio becomes so unnerved he begins to sweat out of wrath and vents his frustration through breaking nearby objects or dramatic arm-waving. His choleric side is expanded upon in the anime as he is seen complaining the loudest about his team's comparatively meager revenues.

Ghiaccio's Stand, White Album, is a Stand which gives him the ability to lower the tempature of the surrounding area; with it, he can also freeze the air around him making an almost impenetrable full-body suit with ice skate-like blades equipped to his feet. The stand, while being very durable, has an air hole on the back of his neck to allow him to breathe and the only weakness of White Album.

Ghiaccio's second ability is known as Gently Weeps. During Gently Weeps' duration, Ghiaccio can lower the temperature even further to around roughly -210 degrees Celsius, impressively close to the point of absolute zero. In this state he no longer needs his breathing hole as he can freeze and unfreeze air rapidly to alow it to bypass his suit. This ability is very versatile, however it requires Ghiaccio to burn a majority of his stand power to maintain.

Ghiaccio is one of the assassins from La Squadra Esecuzioni who, alongside his teammates, rebels against The Boss and seeks his daughter, Trish.

Contacted by Melone, who reveals that Team Bucciarati is on a parking lot south of Rome, Ghiaccio drives over to their supposed location and discovers he is too late to confront the group. At the same time, he hears Melone being killed on the phone. Regardless, Risotto Nero later runs some computer analysis on Pericolo's items and discovers that Bucciarati's group is headed toward Venezia.

During Giorno and Mista's retrieval mission, Ghiaccio appears on top of their moving vehicle and attempts to use his Stand to freeze the air and kill both of them. He utilizes his Stand's powers without actually drawing it out, forming a shield of ice around his body as the car swerves. He soon gets serious when he is forced off the car, donning his armor-like Stand and pursuing them using the Stand's ice skates. His actions force Giorno to drive the car off the road and into the ocean, where he begins to use his Stand to freeze the water. His attacks chase them both until Mista uses the ice to ski to the land with frozen grass made by Giorno.

Ghiaccio instantly melts all the ice, causing Mista to fall just short of the shore. Attacked by Ghiaccio's ice, Mista convinces himself that Ghiaccio's Stand cannot be invincible, and dives underwater to see. It is there that his weakness, the air hole in the back of his neck, is revealed.

Once they both get to land, Mista's work proves fruitless, as Ghiaccio displays his power to freeze air until it erupts, making his hole bulletproof. He begins to look for The Boss' secret disk, soon finding it and declaring victory.

However, after a struggle, he is gradually forced backward until he hits a splintered lamp post that pierces the hole on his neck. Freezing his own blood, he stays alive momentarily, until Gold Experience pushes him further on the post, impaling his neck through and killing him.

Ghiaccio appears as the enemy faced in Chapters 10 and 11 of Super Story Mode, with the player taking control of Mista for both. During Chapter 10, Ghiaccio will be chasing the car that Giorno is driving, with Mista on the car's roof. During this match, the player needs to survive for 2 minutes as Ghiaccio comes closer, trying to attack the car.

During Chapter 11, the player truly faces Ghiaccio. During the match, Ghiaccio will keep skating along the stage and try to attack his opponent with impulse attacks as he uses White Album. The player needs to attack Ghiaccio from his back since it's his weak point. Ghaccio's secondary attack is freezing the ground in two different ways: the first one has him send ice crystals out in a line with some homing capabilities, and the second one makes him send ice crystals outward in six directions. In both attacks is Ghiaccio vulnerable to attack. He can also use White Album Gently Weeps to temporarily reflect any bullets and potentially trap Sex Pistols if Mista Stand Shoots him during this period.

Ghiaccio appears as an explanatory character in the JoJo Dictionary menu. He guides the player through the Trivia, Story, and Character Profiles tabs, notably becoming irrationally upset when the player attempts to leave. 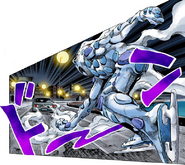 Shot at by Mista 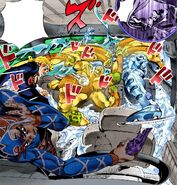 Battling Giorno and Mista inside their car

Ghiaccio's first appearance, furious when Melone tells him about the meager pay for the team's job

Squadra Esecuzioni receives a mysterious package; Ghiaccio wonders whom the sender is

Ghiaccio answering a phone call from Melone while driving

Ghiaccio talking to Risotto on the phone

On the phone with Melone

Being angry at how people say Venezia as Venice

Chasing after Giorno and Mista using his stand, White Album

Stealing the disk from the Boss

Using his armor this time to reflect Mista's bullets

Ghiaccio froze his blood solid to create pillars of ice

Ghiaccio in Uragirimono no Requiem 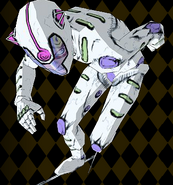 A tribute to Ghiaccio, drawn by Tite KuboW for 25 Years With JoJo 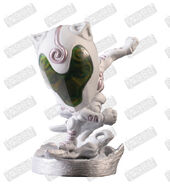