Vento Aureo's graphics can be compared to other cel-shaded games of the PS2 era like Jet Set Radio. The developer, Capcom, utilized a game engine called "Artistoon" in order to create a graphical style similar to Araki's art style in the manga.

Most of GioGio's Bizarre Adventure'

s gameplay takes place in the form of hand-to-hand combat. All battles are fought 1v1, with every battle being an equivalent to a boss fight. The Stands aid the characters in battle by giving them combat abilities, as well as special attacks. Puzzles are also a part of the game, requiring the use of Stands in order to solve them.

The player must learn an opponent's moves and attack patterns in order to properly find an opening and attack. They can deliver melee attacks, use a character-exclusive special ability, or summon their Stand to attack. Stand barrages and the like are referred to in-game as a "Stand Shoot". All Stand Shoot attacks can be charged to increase their duration and eventually allow the player to attack separate from their Stand, opening up opportunities to create combos. Health cannot be restored in any matter other than Secret Factors, requiring a finer degree of skill from the player than other games of a similar genre in order to succeed.

As long as a character's Stand is on, a Stand Gauge above the player's health will drain. Actions such as taking damage or blocking attacks while a Stand is on will also decrease the meter. A Stand Break occurs if the gauge is depleted, leaving the player character unable to summon their Stand until the gauge refills, along with other situational disadvantages.

Chapters have a letter grading based on the performance of the player, with up to 200 "GioGio Points" to be earned per chapter and 10,200 GioGio Points to be earned in the entire game. A rank is lost with every 25 points missing, from S at 200 - 190 points, A at 189 - 176, all the way to E at 100 and below. All Secret Factors on a level collectively add up to 100 GioGio Points and are added with the percentage of the player's remaining health to make up to 200.

A main notable feature is the activation of Secret Factors, various interaction activated elements scattered throughout each scenario that the player progresses to as the game goes on. Considered as side-objectives, chapters can have anywhere between none to four Secret Factors to be done. As the game itself is adapted nearly entirely from the manga, playing out the scenario akin to the official canon will activate these factors, and their effects: giving power-ups to health, Stand endurance, and strength to the character, as well as heavily influencing chapter grading. A counter over the heart next to the player's health displays the Secret Factor level, with 10 being the maximum; At max, the health and Stand gauges will have doubled in length. There are multiple occasions where Secret Factors must be done in a specific order to achieve them all. Many Secret Factors also give the player advantages ranging from invulnerability to/disabling certain enemy attacks to outright winning the battle instantly. They are a unique feature that also celebrates the game's source material and reward fans and readers of the series.

Following the events of GioGio's Bizarre Adventure, the game's main mode has 22 chapters (21 playable and only 1 featuring a full cutscene). In each chapter, the player faces a different opponent.

A handful of characters do not appear in the Super Story Mode; instead, they appear as part of the Story Drama, during cutscenes or simply as character models within Gallery Mode.

The game was set to be released worldwide on October 2002 and was presented at Electronic Entertainment ExpoW (E3) 2002, titled simply as GioGio's Bizarre Adventure. The release was eventually canceled due to unknown reasons, the surmised culprit being copyright issues.

It would not be until JoJo's Bizarre Adventure: All Star Battle from CyberConnect2 and Bandai Namco that another JoJo game would see an international release, the first being Heritage for the Future, also a Capcom product.

A fan-initiated translation project was developed to completely translate the Capcom game into English. The English patch is a combined effort of the groups Joey Jojo's Wacky Trip and JoJo's Colored Adventure Team.[1] It was released on October 20, 2018.[2]

On release, FamitsuW magazine scored the game a 31 out of 40. 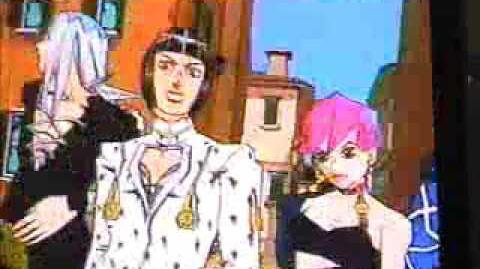 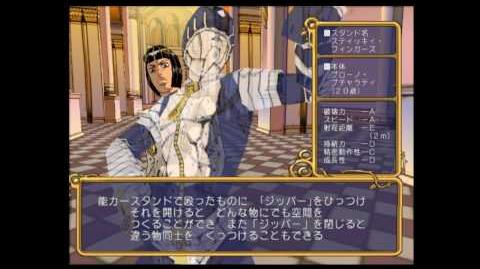 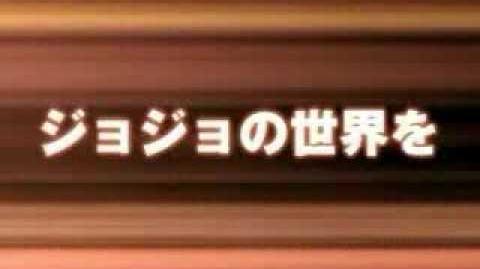 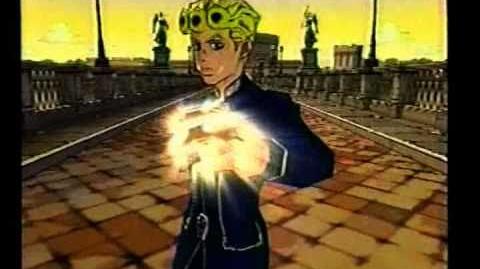 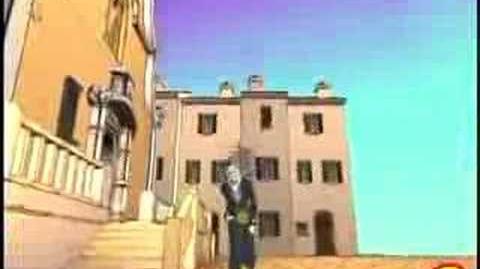 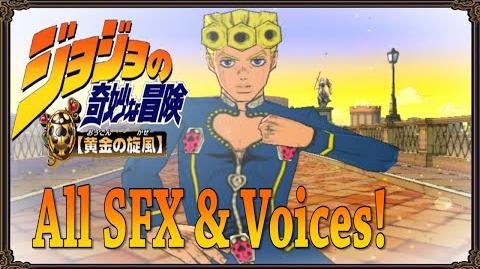 Retrieved from "https://jojo.fandom.com/wiki/GioGio%27s_Bizarre_Adventure?oldid=323566"
Community content is available under CC-BY-SA unless otherwise noted.