This Stand is the evolved 'Requiem' form of Gold Experience, created when pierced by the Stand Arrow.

Gold Experience Requiem is a humanoid Stand of a height and build similar to Giorno's. Many of its features resemble the original Gold Experience, including the ladybugs on its hands and the oblong grooves across its body. Its head extends into pointed tips with the back of the head hollow, giving it the appearance of a crown. Its eyes have a unique design among Stands, with the 'eyeballs' embedded in cross-like structure within slanted sockets. It has an extended ridge collar on the back of its neck and several indentations and various other patterns covering its body. In it's chest, it has an inverted heart.

When it first appears, it wears the Arrow on its forehead; which eventually falls to the ground after Giorno defeated Diavolo.[2]

Gold Experience Requiem is presented as being primarily ivory white in most media featuring it, with brown, amber and violet features.

Gold Experience Requiem speaks to Diavolo in the erased time normally occupied only by him and his Stand King Crimson, explaining that it is able to operate independently of Giorno's consciousness.[3]

It possesses the same voice as its user, Giorno Giovanna, but Gold Experience Requiem speaks in a rather mechanical and polite tone akin to a robot and similar to other Stands capable of speech. It expresses a desire to not only protect Giorno but also shares Giorno's morals and beliefs, looking down on and belittling Diavolo during their brief clash.

Gold Experience Requiem is aware of the fact that not even Giorno knows the true extent of its ability, and confidently states that no other Stand can ever oppose it. The Stand counters the idea of Diavolo's "reality" created by King Crimson's ability by ominously telling him that he himself will never again come to the reality at the hands of its own power.[3]

Gold Experience Requiem is a close-range Requiem Stand that boasts an incredible increase in both speed and power compared to its previous form and it can't be compared to normal stand stats. Created by the Arrow and born from Giorno's strong desire to defeat King Crimson and exact revenge on Diavolo, it wields the arcane power of reverting anything to "zero", effectively undoing their actions; a power that even triumphs over the time erasure/nullification ability of King Crimson.

Gold Experience Requiem is powerful enough as a Stand that it permits Giorno to levitate with it.[4]

Due to its increased power, Gold Experience Requiem has the ability to fire a stone fast enough that it ceases to be visible to the human eye, and has enough power behind it to penetrate through a hand and destroy part of a building. However, in the manga, GER generated a beam made of pure life energy. [4]

Gold Experience Requiem's ultimate ability is to revert all actions and willpower back to the state of "zero", completely nullifying them and preventing them from becoming "real". For simplicity’s sake, it’s comparable to performing Ctrl-Z (undo), completely denying any causality.

If the opponent is killed by Gold Experience Requiem, then they will continuously experience death, as they will die but repeatedly return to point "zero"; the point immediately before the process of death (i.e Diavolo's infinite death loops). Through this ability, GER creates a new "reality", as it calls it, for Diavolo as a form of poetic justice for the many times the mob boss has manipulated reality to his advantage with King Crimson.[5]

The full potential of this ability is unknown. The ability is also passive, meaning it activates automatically, which was proven when Diavolo tried attacking Giorno in his Time Erase, although this does mean it cannot be activated manually.

Despite its transformation, Gold Experience Requiem appears to have not only retained its life-giving abilities after evolving, but said abilities are noted to be vastly more potent compared to the original Gold Experience. This is demonstrated briefly when Requiem fires a small high-speed fragment of Gold Experience with enough power to pierce Diavolo's hand and cause a pillar to crash, before the rubble of the crushed pillar transforms into four scorpions that attack him.[4]

'The World of JoJo' Promo 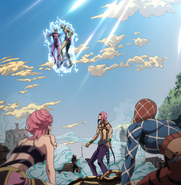 Gold Experience Requiem's closeup of face alongside its user 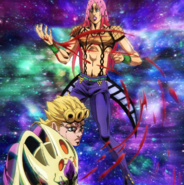 GER beginning to appear in Uragirimono no Requiem

GER in the synopsis of Vento Aureo, EoH

GER during its version of Giorno's solo DHA, EoH 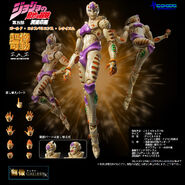 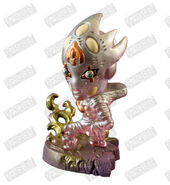