SO Chapter 1 - Stone Ocean, Part 1
The Green Dolphin Street Prison (グリーン・ドルフィン・ストリート刑務所, Gurīn Dorufin Sutorīto Keimusho), also known as The Aquarium (, Suizokukan),[1] is the main setting of the first part of Stone Ocean. It appears to be a unisex prison, though the genders are separated by the prison dorms.

Located in the United States in Port St. Lucie, FloridaW, Green Dolphin Street Prison is a maximum security prison facility, unique in the fact that it is built offshore on an island, preventing its detainees from ever escaping to the mainland. Because of this, it is also known as "The Aquarium." While such a concept for a detainment facility has been used before the introduction of Green Dolphin Street, the prison boasts a large property area, and due to the rather rough and humid Florida environment and ecosystem, as well as the well-equipped and funded facility, the detainees will not find escape possible.

The prison represents an ideal containment center focusing on the importance of freedom and equality. Prisoners are allowed to walk around the campus and commit to their own activities within the allowed areas. Privileges, such as the use of the phone, taking a shower, reading a book, and watching TV are permitted, and even further privileges, such as work and an integrated university for studying are present. Money earned through said work can be used to purchase bonus vanity items and decorations at a gift shop. However, the prison does have various restrictions, such as the prohibition of metallic objects. Prisoners must also shave their heads and follow curfew, though this can be bypassed by bribing the barber and, sometimes, the guards.

The Ultra Security House Unit (特別懲罰隔離房棟) is a separate section of the prison designed to isolate prisoners who are unable to coexist with the rest. This includes those who are in need of protection, child murderers, and prisoners who are prone to violence or frequently try to escape. The facility is located on the southern section of the Men's exercise ground, situated 520 meters away from the Women's ward.[2]

Green Dolphin Street Prison has a full staff of prison guards, and other support workers from doctors to a prison priest. Most of them disdain the prisoners because of the crimes they've committed and are abusive to a high degree. Due to the dangerousness of the prison's occupants, the guards are extremely trigger-happy as well and don't hesitate to shoot prisoners caught in unauthorized areas. They are also somewhat professional when it comes to alerts, quickly donning full riot control gear and coming in numbers to quell any uprising, which has led to a general state of quietness among prisoners.

On the other hand, the staff is also very corrupt and regularly allow prisoners to break the rules of the facility in exchange for monetary bribes.

Most of the inmates have been rightfully sentenced to prison for various heinous crimes, which are reflected in their general demeanor. Almost all inmates are hardened criminals who will use violence to fulfill their goals. Moreover, a good part of them are also unstable, being psychotic or having other mental afflictions. Because of a lack of oversight, most inmates are left to their own devices, leading to a state in which it is easy for prisoners and bullies to prey on the weakest among them.

The most dangerous of the inmates are actually kept in a separate Ultra Security House Unit because they endangered others to a high degree.

Due to Enrico Pucci's DISCs and the Arrow, a good number of inmates have become Stand Users.

Close up of the Facility 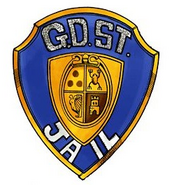 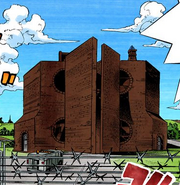 In ASB, the stage takes place outside in the courtyard whereas in EoH, the stage is inside the prison.