Announced on August 23, 2011, it was a collaboration between the fashion company GucciW, the women's fashion magazine Spur and manga author Hirohiko Araki.[1]

The event's main highlight was their first collaborative comic, Rohan Kishibe Goes to Gucci, a short graphic novel that celebrated the reopening of Gucci Shinjuku, the 90th anniversary of Gucci and the 30th anniversary of Hirohiko Araki.[1]

The exhibition was held on the third Floor of the Gucci Shinjuku Building with free admission. Upon entering, a promptly lit wall was presented, displaying all sixteen original pages of Rohan Kishibe Goes to Gucci along with some newer paintings by Hirohiko Araki. The rest of the exhibit showcased Gucci goods that were featured in the one-shot comic for purchase and as well as a life-size statue of the character Rohan Kishibe. 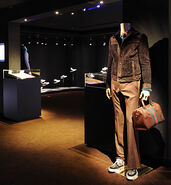 From early January to mid-February 2013, in a collaboration between creative director Frida Giannini of Gucci and Hirohiko Araki, special window displays were showcased at more than seventy GucciW boutiques worldwide.

These installations featured illustrations from their second collaborative comic, Jolyne, Fly High with GUCCI, which was inspired by Gucci's 2013 Cruise collection.[2] The first exhibit was held in a Gucci Factory in FlorenceW, ItalyW. 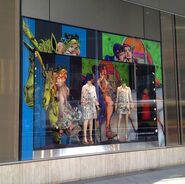 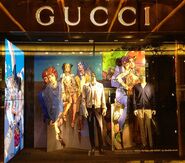