Gwess (グェス, Gwesu) is a minor antagonist, and later a minor ally featured in Stone Ocean.

Gwess is introduced as Jolyne Cujoh's cellmate. She soons decides to shrink the newcomer with her Stand Goo Goo Dolls, but is defeated and becomes Jolyne's flunky.

Gwess is a young woman of average build and height, with long dark hair. She sports three dots under her left eye. Gwess wears horizontally striped pants and a matching tank top, over which she wears a typical Green Dolphin Street inmate jacket. Her pants are covered with stripes over her thighs with different colored normal pant legs behind and down to her feet. She also sports a pair of boots, decorated outside the pants by long accessories that are incrementally indented. She wears a voided hat furnished with a bird feet motif, out from which her hair sticks out, as well as a thick collar around her neck.

Gwess first gives the impression of someone sweet and kind. Originally, she was seen with a 'pet' she made talk and gave treats to. If refused, her personality quickly changed into a mad-driven woman capable of killing for fun. She has no problem with tricking others, but is nevertheless a coward. Unaware of the nature of Stands, she didn't participate in any battles following her conflict with Jolyne, and resigned herself to read magazines and otherwise act subservient toward her cellmate. When Jolyne was under the effect of Miu Miu's Jail House Lock, Gwess hardly talked and was very timid.

She loves things that are "cute", and enjoys making the people she shrinks dress in the corpses of animals she hollowed out and act like pets. She forbids them from talking, except for saying "cute things" to her like, "I love you", in baby-like voices.

Gwess' Stand, Goo Goo Dolls, grants her the ability to shrink the size of selected targets within her range to the size of a mouse. Its has very similar abilities to Formaggio's Little Feet in Part 5.

According to her privilege card, Gwess was sentenced to 12 years in prison after being charged with arson, attempted murder, and parole violation.[2] At some point before Jolyne's incarceration she bought the former's pendant off of Ermes Costello for two dollars, which contained an Arrow fragment giving her Stand powers.

Gwess is introduced after Jolyne arrives at Green Dolphin Street Prison as her new cellmate. Having taken the bottom bunk of the cell, Gwess revealed that she had possession of Jolyne's pendant offering to sell for two hundred dollars; much to the latter's dismay at the lack of money. Despite feighing innocence, Jolyne discovers that she threw the photo inside the pendant into the garbage.

At some point, Gwess had taken a former guard for a pet bird, which she kept shrunk with her Stand powers and trapped inside its dead and hollowed carcass (which she affectionatly named "Pi"). Despite Pi's attempts at affection, Gwess shows a different aggressive side of herself after the bird failed to say "I love you" properly or do anything "cute", upon which she disposes of the bird. After Jolyne is shrunk by Goo Goo Dolls, Gwess immeidately took to her as a replacement for Pi by having her wear a carcass of a hollowed out dead rat and named her "Chorokichi". After having played with her humiliatingly, Gwess plots an escape that features the shrunk Jolyne slipping through the nearby guard post undetected towards the control room across the hall and deactivate the locks in the facility.

Once Jolyne was a distance away from Gwess, her powers began to weaken and gradually returned the former to her normal size as Goo Goo Dolls tried to destroy her. This would awaken Jolyne's Stand, Stone Free, which grabbed Goo Goo Dolls and thus put Gwess at Jolyne's mercy. After having confessed to buying Jolyne's pendant off of Ermes, Gwess gains the upper hand by pushing Jolyne back into the guard post with her Stand ability before calling a guard to execute her. Her attempt to have Jolyne killed were futile as she was swiftly pummeled with Stone Free still being within her range.

Once Jolyne defeats her, she stays reclusive and retains a weakened and slightly fearful demeanor slightly similar to a servant. 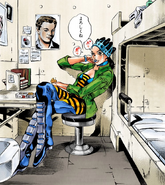 Gwess' first appearance in her cell 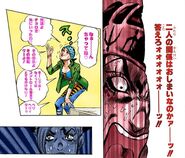 A shrunken Jolyne in Gwess' hands 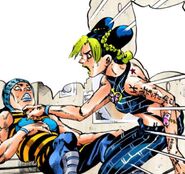 SO Chapter 5 Cover B

SO Chapter 7 Magazine Cover A

SO Chapter 101 Magazine Cover B