Harvest is one of the few Colony Stands, composed of about 500[2] small units that may act individually.

"Harvest" takes the form of small, oval-shaped, insect-like creatures with four articulate arms and two legs; three fingers on their hands; with large appendages at their posteriors, resembling a bee's abdomen.

Their entire bodies are patterned by stark, even horizontal stripes alternating between black and a light purple color. Their faces act as pockets behind which they store whatever they carry. They have a hole on their foreheads that can produce a needle to inject liquids. Their eyes are semicircular, in line with blocky noses.

Most media portray Harvest as yellow and purple-striped bugs.

Harvest speaks in a high pitch of limited phrases, including "Found it!" and the laugh "Hee hee!" autonomously. Their user can speak through them with complete sentences, however.

Harvest is a long range colony Stand one can underestimate because of its and Shigechi's innocuous appearance, its basic power, and the petty way in which it is used to gather lost coins and other knickknacks across Morioh.[4]

However, the number of units coupled with their ability to still punch into the flesh means that Harvest can easily overwhelm even Josuke and Okuyasu,[2] and Shigechi is imaginative in the way he uses his Stand, making it a force to be reckoned with in battle.

Shigechi can command Harvest to search for and collect any particular type of item, provided it’s light enough for Harvest to carry and bring back to him; the child typically uses this power to gather lost coins[4] but on Josuke's advice takes on harvesting store coupons which can bring more money.[8] Harvest has an extremely large range, with its units being able to move through the entirety of a small city without any issue.[8]

It has limited use in combat, but Shigechi is able to dismantle objects rapidly thanks to Harvest, enabling him to occasionally take advantage of the environment[6] or create hiding spots rapidly.[9]

Each individual Harvest possesses a needle with which Shigechi can inject any liquid directly into his opponents' bloodstream, at one point intoxicating Josuke and Okuyasu by injecting alcohol inside them, dazing them and crippling their fighting ability.[6] 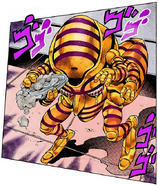 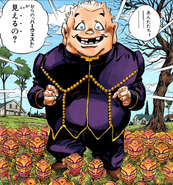 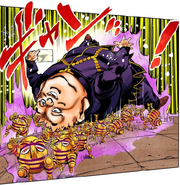 Harvest using a needle on its head to inject alcohol into Josuke's veins.

The final Harvest brings Kira's button to Josuke and Okuyasu before dying.

Harvest using a needle on its head to inject alcohol into Josuke's veins.

The final Harvest brings Kira's button to Josuke and Okuyasu before dying. 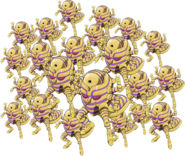 Harvest's render for All Star Battle 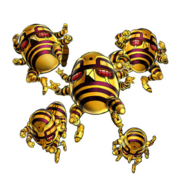 The Harvest mask from Monster Hunter 3G alongside Crazy Diamond 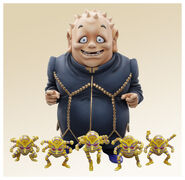 Harvests and Shigekiyo Yangu figurines from the Statue Legend series 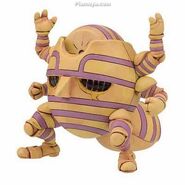 A Close up of a individual Harvest (as a figure)