Hayato Kawajiri (川尻 早人, Kawajiri Hayato) is a side character in Diamond is Unbreakable. He is portrayed as a major ally to the protagonists and plays a crucial role in the last arc of the story.

Hayato is the son of Kosaku and Shinobu Kawajiri and discovers that his father was replaced by Yoshikage Kira. He subsequently tries to put a stop to Kira's threat.

Hayato is a young 11-year old child with a rather scrawny build and straight brown hair that reaches just past his chin.

Hayato is a quiet boy who spends most of his time in his bedroom. He rarely speaks to his parents, preferring to spy on them with electronic devices he has planted in their room. According to his mother, he has no close friends.

However, when pressed into a corner, Hayato proves to be exceptionally brave. He was willing to commit suicide if it would prevent Bites the Dust from activating. Even Josuke comments on Hayato's bravery for his age when he volunteers to set off Okuyasu's explosively-charged body at the risk of death.

Despite having a somewhat strained relationship with his mother, he ultimately loves her and his desire to defeat Kira comes from a desire to protect his mother and the town.

Hayato has also been proven to be exceptionally intelligent, managing to trick Kira into revealing his identity out loud while giving Josuke a phone call to wake him up and meet at a certain location without activating Kira's stand. During the fight between Josuke and Kira, Hayato was capable of giving Josuke important tips despite being unable to see Stands, such as figuring out that Kira could only detonate one bomb at a time using his Bomb ability.

As he spies on his parents with electronic devices, Hayato notices several suspicious things about his father Kosaku, who is being impersonated by Yoshikage Kira. While investigating his father's odd behavior, he is nearly killed by Stray Cat. He begins following Kira and manages to record footage of him murdering a woman and her boyfriend. When he is cornered by the murderer, he attempts to blackmail Kira by revealing that he has further evidence that will be found by authorities in the case of his death. However, his threats only anger Kira, who uses Killer Queen to kill him and make it look like he fell by hitting his head. Immediately after, Kira begins to panic and is spontaneously pierced by the Bow and Arrow while Yoshihiro was trying to convince Kira to leave the town. With Kira's new ability, Bites the Dust, he activates a time loop that restores Hayato to life.

The next morning, Kira gloats to Hayato over his new ability, revealing his true name in the process, as well as the fact that his ability is "invincible." Hayato deduces from this that there are others with similar abilities. Immediately after Kira leaves him, Rohan Kishibe, who has seen Hayato following his father to the train station, uses the power of Heaven's Door on him to learn the identity of his father. Rohan ends up reading events that were supposed to occur in the future and then becomes the first to fall victim to Killer Queen's Bites the Dust ability. Hayato then wakes up in bed again and realizes that he is trapped in a time loop. On this morning he avoids Rohan but is only able to watch him die from a distance as Kira explains the effects of his Stand. He tries to avoid Josuke and company, but is accosted by them and tries to hold Bites the Dust off by killing himself. However, Bites the Dust activates, this time to protect Hayato, killing Josuke and his friends.

Waking up in his bed again, Hayato realizes that he can only rely on himself to unmask Kira. He steals Stray Cat, hoping to use his knowledge of the morning's events to defeat Kira at close range. His attempt nearly succeeds, but Kira is protected from Stray Cat's air bullets by a watch in his pocket. As Kira gloats, Hayato is saved when his secondary plan causes Josuke Higashikata and Okuyasu Nijimura to arrive in time to hear Kira reveal his own name. When Josuke attacks him, Kira is forced to recall Killer Queen to protect him, canceling the effects of the time loop.

During the battle, Hayato plays a major role in assisting Josuke. When Okuyasu is mortally wounded and Josuke is conflicted over whether to risk being blown up by using Crazy Diamond's ability to save him, Hayato throws himself at Okuyasu and sets off the bomb. This sacrifice does not lead to his death, as Josuke pieces his body back together with Crazy Diamond before he dies. After taking shelter in a nearby house, he assists Josuke by relaying information about Kira's location, but unbeknownst to him, Yoshihiro Kira is hidden in his pocket, doing the same thing for his son.

Hayato is among the group of people to witness Yoshikage Kira's death and is last seen tearfully telling his mother Shinobu Kawajiri that he would wait for his father to come home, even though Hayato knows that his father is already dead.

Hayato Kawajiri appears in the game as part of "Kosaku Kawajiri" (Kira)'s Great Heat Attack, "Bites the Dust!". Kosaku grabs Hayato and forces him to run away from him in fear, exclaiming "Killer Queen! Third Bomb!". If Hayato bumps into the opponent, the camera zooms into the opponent's eye as Hayato screams, where Killer Queen appears and detonates the time bomb. The round timer rewinds by ten seconds and Kosaku regains health. If the opponent has gone through a transformation (Gold Experience Requiem, Made In Heaven, any Steel Ball Run character with the 3 corpse parts or Kars' Ultimate form), they are reverted back to their original forms. However, if the opponent manages to avoid the attack, Hayato will sprint the other direction.

Hayato also appears as a memo book for the Special Edition of the game (called Gold Experience Edition), where the book contains information such as character profiles and manual guide. The special edition also contains a code to freely unlock the character Yoshikage Kira.

Hayato spying on his father. 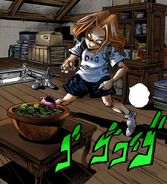 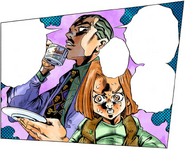 Hayato being taunted by Kira. 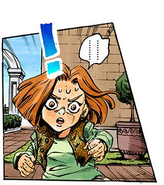 Hayato with his food.

Hayato during the fight with Kira.

Hayato encourages Josuke to leave his friend for dead.

Hayato looking of surveillance footage of his "father".

Hayato glares at Kira, rather than saying goodbye.

Sneaking back home, Hayato eavesdrops on his parents.

Discovering Stray Cat in the attic.

Hayato pinned against the wall by shackles made of air.

Hayato cowers in fear after learning his father has been replaced by Kira.

Hayato videotaping Kira to find evidence of who he is.

Hayato with a video camera in one of Rohan's photos.

Hayato determined to discover who is disguised as his father while he's at school.

Shocked and terrified after recording Kira murdering a couple.

Hayato nervously hides the evidence in a bath bucket.

Hayato being intimidated by Kira in the bathroom.

Hayato scared after Kira reveals he knows about the evidence.

Hayato about to be killed by Killer Queen.

Hayato makes his last stand, warning Kira not to harm him or his mother.

Grabbed by Killer Queen, detonating the bomb in his hair and killing him.

Hayato's corpse is hidden in the closet by Kira.

Hayato turns to face his mother, his death having been reversed.

Hayato being scared by Kira, who plans to talk to him.

Being taunted by Kira over his inability to stop him.

Hayato being questioned on who Bites the Dust killed.

Hayato discovers he is primed with Bites the Dust, forced to unwillingly protect Kira's identity.

Josuke and the others meet Hayato.

Hayato has his nosebleed healed by Josuke's Stand.

Hayato being interrogated by the Joestar group.

Hayato's suicide attempt is stopped by Bites the Dust.

Hayato being sent back in time.

Hayato weeps over the deaths of the Joestar group.

Bites The Dust appears in Hayato's vision, during time reverse.

Hayato reveals to Kira his plan to kill him with Stray Cat.

Horrified when he realizes his plan has failed.

Kira's punch is stopped by Bites the Dust.

Hayato proud that Bites the Dust's effects have been disabled.

Hayato worries about his new friends being hurt by Kira.

Hayato sacrifices himself to disable Kira's bomb on Okuyasu.

Shocked to discover Yoshihiro Kira escaping from his jacket pocket.

Hayato tells Kira that he has lost.

Hayato tearfully sitting at the dinner table after Kira's death, remaining strong for his mother. 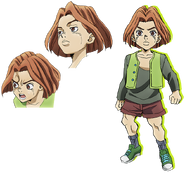 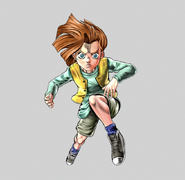 Hayato as he appears in Eyes of Heaven 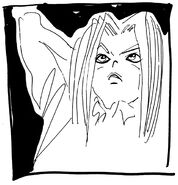