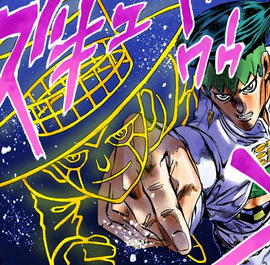 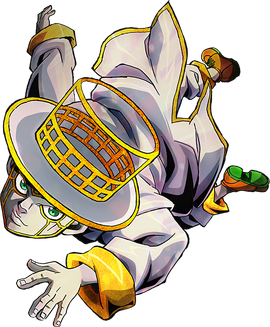 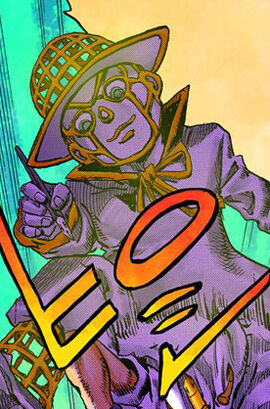 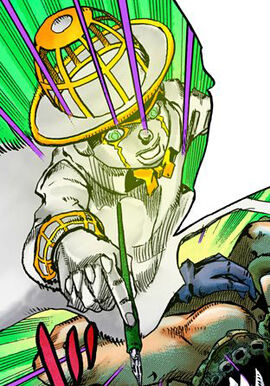 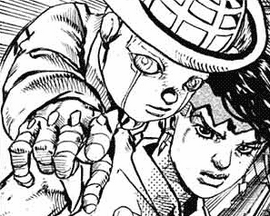 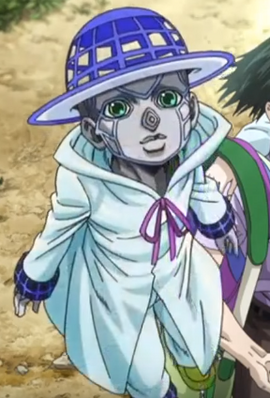 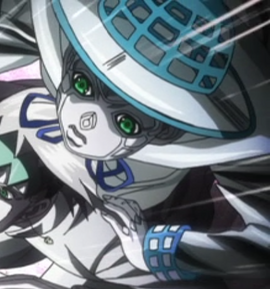 Heaven's Door is initially introduced as an ability without an appearance,[1] but takes on a full-fledged body in later arcs.

Heaven's Door resembles a small boy similar to Rohan's manga character, Pink Dark Boy. It wears a long overcoat, closed to the end of its torso, and a bow tie. It has lines emanating from the bottom and the bottom-outsides of its eyes. Its flat-topped hat is similar to a boaterW – In later stories, it more closely resembles a bowler hatW, while in its first appearance (in Rohan's "Pink Dark Boy" manga), it wore an opaque fedora.

Rohan may summon it or induce its effect with certain paper drawings; or an air drawing with his finger in its image when it is invisible save for its outlines.

Heaven's Door is portrayed as being white with golden outlines across most media featuring it, except the OVA where the outlines become blue.

Heaven's Door is a weak close-range Stand unsuited for direct combat, but has several powerful abilities. For an inquisitive mangaka like Rohan, Heaven's Door is a handy way to gather research material out of people's pasts without the hassle of an interview.

During its introductory arc, Heaven's Door acts when Rohan's target sees it or an image of it drawn by him, which he can make in mid-air, with a pen or with his finger.[2] However, closing one's eyes or being simply unable to process the image, like being filled with rage, will make the opponent immune to Heaven's Door.[3][4]

Later on, Rohan can simply summon his Stand and approach people to affect them.[5]

Heaven's Door's basic ability is to turn people into books, pages unfurling from their bodies in the shape of whatever body part it opens from (for example, if from the face, the shape of the pages is of the person's entire face, eyeholes included).[1]

The contents of the books contain detailed and absolutely true information on their subject, including physical characteristics, memories and thoughts from their earliest to their latest, personality, and any details on their Stand, if they have one.[1] Later on, Rohan uses this ability on a chicken leg to determine its expiration date.[6] Targets may be incapacitated to varying degrees while under this effect. Rohan cannot read his own memories, nor can Heaven's Door reveal any information and memories that his target knows about him.[7]

A dying person's details are seen to gradually disappear.[8] However, Heaven's Door is effective on both ghosts and the undead (as shown on Reimi Sugimoto,[9] and zombie-like spirits in Rohan at the Louvre). In animals, details comprise relatively literal descriptions.

Occasionally, it is shown that since people under the effect of Heaven's Door literally turn into books, Rohan can also use this forced physical transformation to his advantage. Rohan has notably used this power to unravel Okuyasu's limbs[3] and at another time, save someone from being crushed by two speeding trains by transforming their body into a book and flattening it enough to fit between the trains.[10]

By removing pages, Rohan causes his target to lose any memories detailed there, along with a proportionate quantity of body mass, making them lighter.[11] Should Rohan receive a substantial amount of physical damage or be knocked near unconscious, the removed pages will automatically return to their original source.

By writing into the pages of a person or object transformed into a book, Rohan may alter or erase memories, or put hypnotic-like commands into the person's mind.[11]

Rohan's target will obey commands written into them without fail, even against mental resistance (for example, despite a fear of fire, Okuyasu is forced to hold a lighter to himself). He can even make his target obey commands that shouldn’t be physically possible, such as commanding Josuke to fly backwards at 70 km/h[12] or allowing Koichi to speak Italian.[13]

A particular command Rohan instills in targets is the Safety Lock (, Seifutī Rokku), in which he writes in a command that prevents the target from attacking him.

While Rohan cannot read his own memories, he may write commands on himself (for example, by writing on his forehead, he commands himself to repress all memory of the events of Rohan at the Louvre, though they return after the command rubs off). The canonicity of this is questionable, however, given the contradictory nature of the one-shot and its lack of affiliation with the Thus Spoke Kishibe Rohan series. 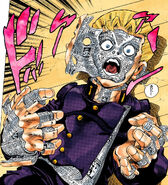 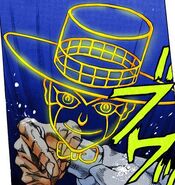 Rohan at the Louvre

Heaven's Door struggles to transmute Highway Star while being choked.

Heaven's Door reaching for the screen in the third opening, Great Days. 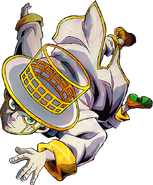 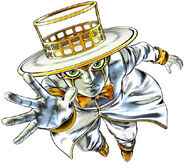 Appearance in All Star Battle (PS3) 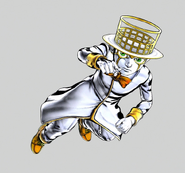 Appearance in Eyes of Heaven