Hierophant Green (ハイエロファントグリーン（法皇の緑）, Haierofanto Gurīn) is the Stand of Noriaki Kakyoin, featured in Stardust Crusaders. Hierophant Green is an elastic and remote Stand, capable of being deployed far away from its user and performing actions from a distance. Kakyoin has possessed this Stand since birth.

Hierophant Green is an athletic humanoid with robotic features, such as the eyes and legs, but its true form is that of a long web of tentacles. It is only slightly taller than Kakyoin himself, though it can stretch itself to great lengths. Hierophant Green possesses a body covered in veiny lines, which is protected by a light-colored armor. Despite its emotionless face, it seems to have a human-looking mouth underneath its mask.[1]

Whenever the appendages glow, the Stand is priming for an attack, such as its Emerald Splash technique.

Hierophant Green is consistently portrayed as being green across all media featuring it, befitting its name. All-Star Battle features a turquoise-colored version of it. However, its armor is white-green in the colored manga and grey in the anime and games.

Hierophant Green appears to not have a personality, serving Kakyoin without hesitation or question, even seeming to act as Kakyoin's mouthpiece; although Kakyoin mentions that it hates wide open spaces and enjoys ripping things apart, such a trait is never shown.

Hierophant Green is the very first Long-Distance Stand shown in the series, and it has a large number of abilities to assist it in combat and scouting. However, the Stand is relatively weak in direct hand-to-hand combat, as a trade-off for its great distance-based abilities.

As Hierophant Green's original appearance is not humanoid, but instead just a group of connected membranes, it is able to unravel itself into multiple long strings for multiple purposes such as acting like ropes,[2][3] avoid damage without hurting Kakyoin himself (as shown in the battle against Death Thirteen)[4] or weave out a network of sensitive strings that detects the enemy's movements, as during the battle with DIO.[5]

As such, Kakyoin can control how Hierophant Green unravels, creating strong ropes or unraveling them into invisible strings. A single string has the ability to sense when someone is touching it and can attack either automatically or at Kakyoin's command. When a string is broken, Kakyoin is unharmed, but attacking a sufficient number of them or Hierophant Green's main body will harm him.

Hierophant Green is capable of sliding its coils into a person's body, allowing Kakyoin complete control of that person. This serves to protect Hierophant Green and Kakyoin from attacks if his opponent is someone unwilling to harm the innocent. Additionally, he can completely destroy the controlled being's air passage as he emerges, as well as the host's internal organs. When this ability is first used, Kakyoin is shown holding a marionette by the strings, but it is unknown if this is actually part of the ability, or just for dramatic effect.[6]

Emerald Splash (エメラルドスプラッシュ, Emerarudo Supurasshu) is Hierophant Green's most powerful ability.[7] It gathers energy into its body, causing it to glow bright green, before firing off a large amount of energy which takes the form of emeralds. Before the blast is fired, a green slime-like material (water-like in the anime) is produced by Hierophant Green's hands, a byproduct of a large amount of energy the attack is giving off.

The blast's range and shotgun-like dispersion, along with its incredible destructive power and high speed, makes Hierophant Green an extremely capable combatant. Interestingly, it seems that though this blast is quite powerful, it doesn't seem taxing on either Kakyoin or Hierophant Green. However, the likes of Star Platinum or even a Vampire can easily block or deviate the attack.[8] 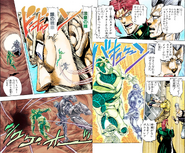 Kakyoin and Polnareff shrink their Stands

Hierophant Green's statistics in the anime

Anime reference sheet: front, side back

Hierophant's Emerald Splash, as depicted in the OVA. 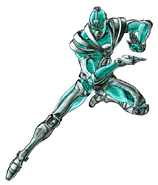 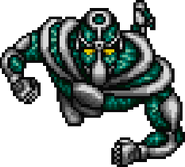 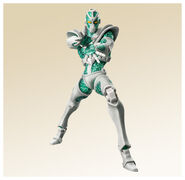 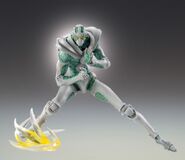 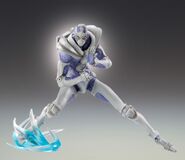