High Priestess is a Stand bound to minerals. Its "default" form is that of a small creature having a tribal mask with vicious eyes and bared fangs for a face, and clawed thin, muscular arms sprouting out a mush of inorganic matter. Moreover, it can turn into anything inorganic.

According to JOJOVELLER, its design takes elements from traditional outfits for African magic.

In the colored manga, High Priestess is reddish-brown with blue fur. In the anime, it is bone white with brown fur.

It represents the Tarot Card The High PriestessW, which symbolizes intuition, mystery, and arcane knowledge.

When Midler doesn't talk through it, High Priestess acts feral, only letting out savage cries or laughter and endlessly chasing after the Joestar Group.[1]

High Priestess is a formidable opponent physically speaking. Its small size and nimbleness make it difficult to strike and its claws are very dangerous, being able to cut through Joseph's metal hand.[2] This, combined with its ability that multiplies its options, makes for a fearsome opponent.

High Priestess possesses teeth harder than diamonds, making them almost unbreakable.[3] It can use them to bite hard on or crush the opponent by chewing them.

High Priestess possesses the ability to shapeshift and assimilate itself into any type of inorganic matter, so long as it's a material made from a mineral substance, be it rock, metal, glass, or plastic.[1]

Moreover, it can also replicate rather complex structures, transforming into a spear gun to shoot itself at the Joestar Group.[4] The transformation is convincing enough that cautious examination or even trying to touch it will fool anyone. Because of that, it can disappear into a wall and then reappear elsewhere to strike.[1] Its small size by default belies an ability to turn gigantic if it can assimilate a great amount of material like the stone of the sea floor.[4] 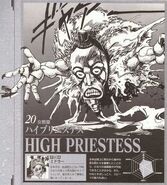 High Priestess disguised as a mug 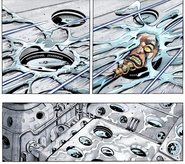 High Priestess hidding between the gauges

High Priestess disguised as a handle 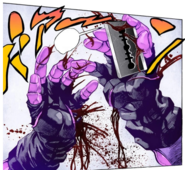 High Priestess as a razor blade

High Priestess as a harpoon gun 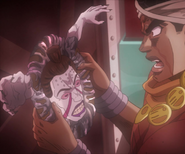 High Priestess disguised as a handle

High Priestess as a harpoon gun

High Priestess furious at the group

High Priestess alongside Midler in Heritage for the Future 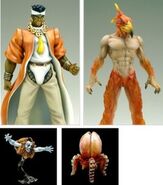