His one and only wife - Asami Araki

Poker Under Arms (1980)
Hirohiko Araki (荒木 飛呂彦, Araki Hirohiko, born June 7, 1960 in Sendai, Miyagi[3]) is a Japanese manga artist, primarily known for being the author of JoJo's Bizarre Adventure, which this wiki is based on.

His work on JoJo's Bizarre Adventure is divided into several parts and continues to be serialized for 30 years, totaling 122 volumes (as of December 2018), circulating over 100 million copies (July 2019).[4] His style has been described as an "experimental, but definitive approach.[5][6]"‎

Araki is often commented on for his unchanging youthful demeanor over the years. He cites training and swimming at the gym and Hitomebore rice as methods for staying fit while over the age of 50.[8] In his 2007 Eureka Interview, he is complimented by Japanese psychologist and critic, Tamaki Saito, but states that the main reason he switched to a monthly serialization was from no longer being able to handle the weekly schedule.[9]

Araki is well known for his position on staying healthy. He enjoys going on walks and riding a bike, particularly to Japanese shrines, and has commended it as his coping mechanism when exhausted from work. He considers exercise as a great way to discipline one's self and that carrying too many things can be a burden; Araki will typically only carry a coat, water, and an iPod when going out.[10]

Married to Asami Araki (荒木麻美, Araki Asami, nickname Chami), Araki is the father of two girls. A couple years after his debut, Araki met Asami in a group meet-up, and the two got married three months later.[11]

Araki grew up in Sendai, Japan with his parents and younger identical twin sisters. He cites his sisters' annoyances as the reason he spent time alone in his room reading classic manga from the '70s, such as Ai to MakotoW, and his father's collection of art books, which Araki assumes informed his motive for drawing manga.[12] He was particularly influenced by the work of French artist Paul GauguinW.[13]

Araki drew his very first manga while he was in 4th grade. He attended a prep school through junior high and high school, which was where a friend complimented him on a manga he drew for the first time. Ever since, he began to draw manga in secret of his parents.[12]

He began submitting work to publishers during his first year of high school; however, all of his submissions were rejected.[12] At the same time, others artists who were around his age continued to make big splashes with their debuts (Ex: Yudetamago, Masakazu Katsura). Araki could not understand why he was being rejected, so he decided to finish off a submission on an all-nighter, go on a 4-hour trip to pay a visit to the editors in Tokyo, and ask them for an explanation. At first he intended to visit Shogakukan, which published Weekly Shōnen SundayW, but he was intimidated by the size of their building, and decided to take his submission into the smaller Shueisha (Publishers of Weekly Shōnen Jump) building next door. It was noon when he visited, but one rookie editor (about 6'2", or 185 cm, tall) happened to be there. The editor, after reading the first page, promptly quipped "your white-out's leaked (You haven't fixed it)": he was criticized every time the editor flipped through each page. Araki, exhausted from having been up all night, felt like he was going to pass out, but was told to fix it up for the Tezuka Awards in 5 days. That submission was "Poker Under Arms", which won the runner up prize at the Tezuka Awards.[12][14]

Araki left Miyagi University of EducationW before graduating, and made his debut in 1980 with the aforementioned one-shot Poker Under Arms. His first serialization in Weekly Shōnen Jump was Cool Shock B.T. in 1983,[14] with his works Baoh: The Visitor (1984) and Gorgeous Irene (1984) following soon after. His next series would become his magnum opusW, 1986's JoJo's Bizarre Adventure.

Published in Weekly Shōnen Jump between 1987 and 2004 and from 2004 to the present in Ultra Jump, JoJo's Bizarre Adventure represents Hirohiko Araki's primary brand and body of work.This section requires expansion.

The dust jacket of every volume of JoJo contains a note to the reader; a relatively great source of Araki's direct opinions.‎

In terms of cartooning, a comparison can be drawn between Phantom Blood, Battle Tendency, and Stardust Crusaders (1987 - '92) and the hypermasculine (and highly dimorphic) anatomical ideals applied by Tetsuo Hara in Fist of the North Star, and referenced by Araki in relation to action heroes of the 1980s.[15] Diamond is Unbreakable ('92 - '96) marks a transition to a more intersexual model; while Steel Ball Run (2004 - '11) sees greater realism, along with further incorporation of ideals of beauty consistent with the mode in fashion design.

Reference to illustrations by artists including Antonio Lopez and Tony Viramontes informs a number of individual illustrations and character poses in Araki's work from 1987 - 1992; decreasing from then along with increased use of photographic references.[16] Limited examples of costumes borrowed from contemporary fashion design have been identified.

As a film fan, In the 1980s Araki noted the popularity of action movies and the muscular physiques characteristic of their stars (such as Arnold Schwarzenegger and Sylvester Stallone). By this example, Araki would ponder; "Who is the strongest person in the world?". Subjects such as immortality and justice occurred to him as things that humans innately value and seek. Araki had also been on a trip to Italy two years prior to the creation of Part 1: Phantom Blood, where he identified the exaltation of overt human beauty characteristic of renaissance art. Araki would combine these examples in the formulation of the basic plot and visual style of Phantom Blood.[15]

Araki has named Paul Gauguin and his approach to color theory as an influence.[17]

Araki has described his drawing method as "classical".[15] He has indicated admiration for Leonardo da Vinci in the text of the manga and otherwise; and in a video feature in JOJOVELLER, he is seen making visual reference to a book of Michelangelo's work[18] during the construction of a piece.

Manga that Araki has named as admirable or having had particular influence on him include Ai to Makoto by Ikki Kajiwara and Takumi Nagayasu, the most significant of his youth;[19] Ore wa Teppei by Tetsuya Chiba, which inspired him while in middle school to join the kendo club;[19] and Babel II by Mitsuteru Yokoyama, particularly influential for the concept of combat defined by special rules or laws.[15]

Araki has authored a book on the subject of Horror film and its influence on his work.

Araki has described his habit of naming characters and Stands after musicians and their works as "a simple hobby", and has indicated a strong preference for Western popular music.

Araki at his Gucci Exhibition in Florence 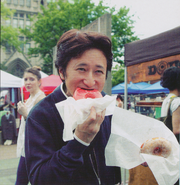 Araki in New York in JOJOmenon

Araki and Shoko Nakagawa in an interview 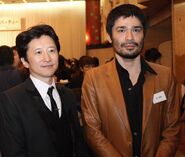 Araki and Shoko Nakagawa/Shizu going out for Italian

Araki on "The Profiler" 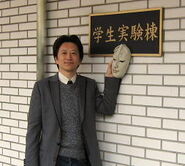 Araki and Kazuki Yamamoto (from his book)

Araki and Soul'd Out at Hirohiko Araki JoJo Exhibition (2012) 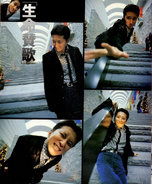 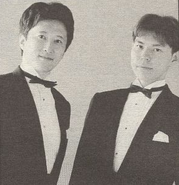 Araki at JoJo in Paris

Araki on Sunday Art Museum "Escher: Beyond the Infinite" (2019) 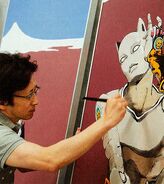 Araki's promotion for the Iwate Land of Hope Sports Festival

A tribute to Matrix Reloaded

The cast of the movie The Prestige drawn by Araki 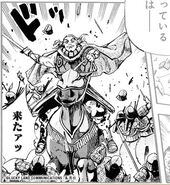 Araki's artwork for the 2008 movie Taken 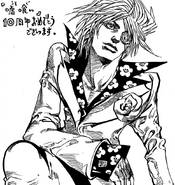 Fujiko Fujio A by Araki 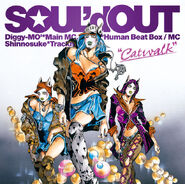 Cover to the album "Catwalk" by Soul'd OutW. Drawn by Araki 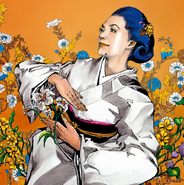 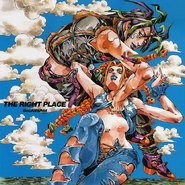 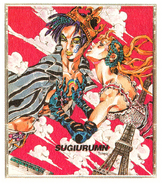 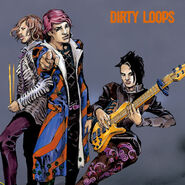 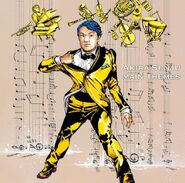