The event encompassed the entirety of JoJo's Bizarre Adventure's history and acted as a culmination of its 30 years of publication. Featuring original artwork from Araki, both old and new, the exhibition hall utilized various technologies to create the "largest displays in the history of the JoJo manga series."

This is the second time The National Art Center, Tokyo (Japan's largest museum) has held a personal exhibition for a Japanese manga artist, the first being Osamu TezukaW back in 1989.[1]

In the press conference of this event held on June 21, 2018, a anime adaptation for Vento Aureo was revealed.

The exposition featured about 200 exhibits and 280 original drawings disposed into several different named spaces. New works of art such as sculptures by Motohiko Otani and Kunihiko Morinaga as well as a display by the visual design group WOW were displayed alongside Araki's drawings and paintings.

One of the key features of the exposition is a series of twelve canvas 2 meters high and 1.2 meters wide featuring several nearly life-sized characters disposed in a U shape to surround the visitors. The disposition aimed to put the characters in the same space as the visitors. Its name and theme is "There is always a traitor". 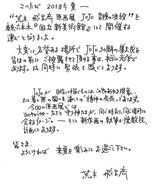 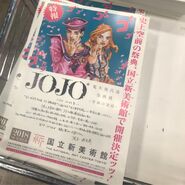 Visual for Kanazawa's Ripples of Adventure

Visual for Nagasaki's Ripples of Adventure