After the initial showing, the exhibition reopened at the Mori Arts Center Gallery in Tokyo from October 6 to November 4.

The exhibition included several original illustrations from the series and was live-streamed through the internet in an augmented first-person perspective. Araki designed a new Stand named Remote Romance, with the ability to project live-streams of distant locations; as a way to explain how people might see it from an in-universe perspective.

In the press conference of this event held on July 5, a new PS3 game and anime adaptation were revealed. 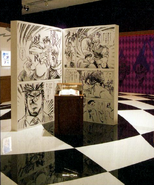