Investigate the Saint's Corpse rumours for the Vatican

Hot Pants competes in the Steel Ball Run race while posing as a man, seemingly a typical participant, but is later revealed to be an agent of Naples and the Vatican working undercover. Her main goal is to investigate the rumors of the Saint Corpse and gather all of its Parts. While not a constantly present ally, she assists Gyro, Johnny, Lucy and even Diego at various points during the race, however; her mission is almost always the focus behind her actions.

Hot Pants is a woman of above-average height, medium build, and straight short hair. However, her relatively androgynous traits and loose clothes allow her to pass off as a man.

Hot Pants' whole body is covered by a baggy striped suit further covered with a long blouse decorated with metallic flowers and leaves decorations, lined with fur and having a second layer of cloth covering her chest. Hot Pants also has various accessories such as a fur deerstalker hat decorated with a single spike (sometimes a tassel) at its top, furred elbow pads, and assorted leg warmers. She also has a belt bearing the letters "HP".

Hot Pants keeps Cream Starter in a holster at her hip.

Hot Pants is introduced as a rough and vindictive individual, accusing Johnny and Gyro of stealing her supplies and immediately attacking them upon their first meeting. Even when Johnny disproves Hot Pants' accusations, Hot Pants merely backs off and doesn't apologize for her attack, claiming that the duo was guilty of eating some of her meat anyway.[4] This behavior earns her a particular enmity from Gyro's part, who would see her as an enemy.[5][6]

Hot Pants speaks in a particularly rough and masculine manner in spite of her gender, for instance using the pronoun Ore (オレ) to refer to herself. This and her clothes allow her to pretend to be a man and perform her mission under a false identity.

It is revealed that Hot Pants harbors great guilt. As a child, she and her younger brother were attacked by a bear and Hot Pants ultimately pushed her brother toward the bear to escape. Having kept her dark secret from everyone, Hot Pants became a nunW to seek forgiveness from God and her brother.[7] Furthermore, she is dedicated to the search for the Saint's Corpse as she hopes that in gathering them, she will also be granted forgiveness[8]. For instance, she shows a rare bliss when taking a Corpse Part[9] and is ready to risk her life against Funny Valentine.

Hot Pants' Stand is Cream Starter; a handheld aerosol spray-like device, generating flesh as well as channelling her own; enabling her to distort and extend her body, slip through tight spaces, and seal wounds.

Hot Pants was born in a small town in the USA around 1867, and as a young girl would often go into the nearby woods with her younger brother to collect nuts. One day, while out nut collecting, they were attacked by a grizzly bear which cornered them into a rock crevice they had attempted to hide in. Left injured, scared and with no way out; in a moment of desperation Hot Pants pushed her brother towards the bear - buying her enough time to escape and save herself at the price of his life. The people of her hometown were very kind to Hot Pants and her parents after what she had led them to believe was a "tragic accident" which had happened to her brother.

As the years passed, the guilt of knowing the truth surrounding her brother's death became too much to handle. She eventually left her hometown and joined a convent in Italy, hoping that becoming a nun would allow her to earn forgiveness from God and her brother. Although she seems to have been able to suppress the guilt somewhat by the main events of Steel Ball Run, it is shown later on that she was never able to truly forgive herself.

Sometime after her brother's death, but prior to the Steel Ball Run race, Hot Pants manifested her own seemingly natural Stand, Cream Starter.

Hot Pants first appears at the beginning of the race's Fourth Stage, having finished first in the Third Stage. Soon she encounters Johnny and Gyro, accusing them of having killed a cow she had been especially grazing on the course. She ends up attacking them using Cream Starter, preventing them from attacking by covering their hands and faces with her Stand's "flesh spray." Johnny convinces her that they weren't responsible for the cow's death, and she recalls the effect of her Stand. She refuses to apologize for blaming them as they had eaten meat from the carcass, then gallops away to hunt down the real culprit. However, they meet again sooner than expected as all three become trapped in the orchard surrounding Ringo Roadagain's cabin. They witness the confrontation between him and Gaucho and end up deciding they will have to kill Ringo in order to continue. While Johnny and Ringo talk, Hot Pants attacks the latter with Cream Starter, slicing off his hand. Unfortunately, he rewinds time and reverts the damage, sidestepping the attack when it happens a second time and shooting Hot Pants' hand. He and Johnny then engage in a gunfight, which Johnny seemingly loses, and Ringo incapacitates Hot Pants by shooting her as well. After Gyro defeats Ringo, he and Johnny use Cream Starter to fill their and Hot Pants' wounds. Johnny then inadvertently discovers that the unconscious Hot Pants is a woman when he checks her chest to see if she is still breathing.

Hot Pants drops out of the race in its sixth stage to further pursue the Corpse Parts. She meets Lucy Steel, who wants to give the corpse parts to Gyro and Johnny after their altercation with Blackmore. She gives Lucy some meat spray from Cream Starter to change her appearance in order to infiltrate Valentine's compound. She tells Lucy how to bring the corpse parts together using one of the eyes of the corpse. After Lucy is found out and ends up killing Scarlet, Hot Pants enters the compound to help her and fights off Mike O. and his Stand Tubular Bells. After spraying him with Cream Starter, she causes Mike O. to accidentally kill himself by filling himself with air. Before escaping, she switches Lucy's face with Scarlet's to make it appear that Lucy was the one who died.

Later, she is seen by Gyro and Johnny speeding towards a church. When Gyro goes inside the church, she disguises herself as a nun (Gyro does not know that she is a woman at this point). Johnny comes into the church as well, and when Gyro leaves to find Hot Pants, Johnny reveals to Hot Pants that he knows her true gender. For the first time, she breaks down into tears as she tells Johnny that her Corpse Parts were taken by someone. At that moment, her deceased brother appears on her body due to Civil War. She says that the guilt has followed her even as she collected Corpse Parts, even when she became a nun in her hometown. She tells Johnny to run as the memory of her brother's death nearly consumes her. After Axl RO is killed, she is absolved of her sins (at least physically) and is left by Gyro & Johnny.

Hot Pants, after trying to suffocate Diego, teams up with him to take the corpse from the President. The duo, after catching up to the train that Valentine is on, fights off the many Funny Valentine clones brought forth by D4C. After Diego's death, Hot Pants boards the train car that is holding Lucy Steel. She is marveled over the mosaic of the Corpse Parts on Lucy's body. However, Lucy's Stand, Ticket to Ride, finally takes form and the President manipulates the Stand for his own use. Hot Pants is the first to fall victim to the Stand's ability when D4C has multiple insects and a window frame be absorbed under her skin, puncturing her heart and nearly killing her. This causes Hot Pants to fly out of the moving train and tumble onto the ground, where she perishes.

Hot Pants drops out in the sixth stage, with a total of 215 points and one extra hour of time.

Hot Pants appears in Eyes of Heaven as a support in Story Mode. She has one voice line, performed by Megumi Toyoguchi. 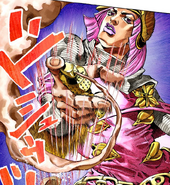 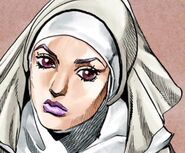 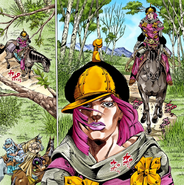 Approaching Gyro and Johnny, followed by their first interactions 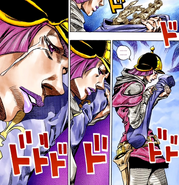 Embracing several corpse parts after procuring them from various opponents 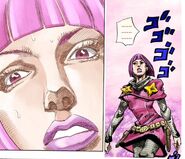 Voice track in Eyes of Heaven