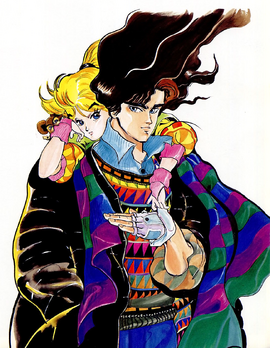 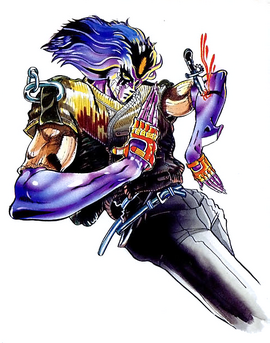 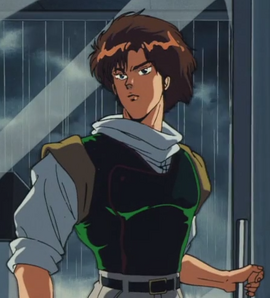 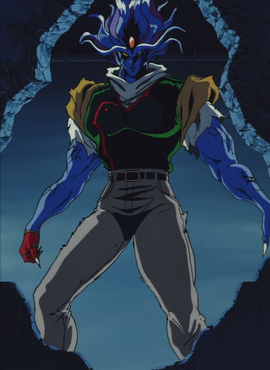 A teenager, Ikuro is kidnapped and transformed into the bioweapon "Baoh" by the Doress Laboratory.

Ikuro is notable for being the only non-JoJo character featured in the 2013 fighting game JoJo's Bizarre Adventure: All Star Battle.

Ikuro is a teenage male of average height and medium build. He has full-bodied hair of medium tone.

As Baoh, the bioweapon, Ikuro's skin takes on a bluish hue. The region surrounding his eyes is cracked, as though a shell, revealing a dark or shadowy interior, while his eyes shine out. His hair is swapped for a flowing mass of long strands of what appears to be flesh; while the height of his forehead is embedded a vertical oval emanating light, surrounded by black.

Due to his amnesia, Ikuro knows very little about his past.

He is a rather friendly individual, but he is willing to do illegal things to keep himself alive, such as stealing a person's bike. He has a strong bond with Sumire and was willing to risk his life to save her.

As a Baoh, he is extremely violent and amoral, willing to kill whoever or whatever threatens him.

When Ikuro's body is attacked (such as during his near death at the hands of Number 22), it transforms by means of the Baoh Armed Phenomenon (バオー, Baō Āmudo Fenomenon), covering its body in a protective armor that granting the body superhuman strength and healing, which he can also use to heal others. As a Baoh, Ikuro displays other abilities.

Ikuro appears as Baoh as the final DLC character released for this game; accompanied by a Campaign set centered around him. He also appears in an extra battle in the JoJolion Story Mode chapter.

In the overseas release of the game, he was released in the first public DLC pack on May 14, 2014 along with Lisa Lisa and Part 3 Joseph Joestar, earlier than his Japanese release date.

As Ikuro is unable to speak in his Baoh form (only capable of repeated battle cries of "BARU!" as well as general roars), he is accompanied by the game's narrator calling out the names of his attacks along with descriptive phrases. However, Ikuro will call out the game's name on the title screen in his human voice, and briefly speaks lines, also in his human voice, during his special mirror match intro and during match victories.

Ikuro's moveset revolves around Baoh's special abilities. While he has much lower-than-average health, exclusive to Ikuro is the "Baoh Armed Phenomenon" Style, which grants him health regeneration starting at 75% health, its effect boosted every 25% he loses.

Ikuro's HHA, "Laser Beam!", has him wire a large laser cannon to himself as his feet leave the ground, before firing a narrow red beam capable of hitting at all ranges instantly. The HHA mirrors the way Ikuro defeated the psychic warrior Walken.

Ikuro's GHA, "Time to cover up that stench!", has him roar as he charges at the opponent. If he hits, Ikuro picks the opponent up by the face and uses Meltedin Palm Phenomenon, before repeatedly assaulting them with a merciless extended Reskinharden Saber Phenomenon combo attack. Ikuro then finishes by grabbing the opponent by the neck and throwing them overhead, slamming them into the ground hard enough for them to bounce, before frying them with a super charged Break Dark Thunder Phenomenon from his hands. During the GHA, the narrator describes how Baoh identifies his opponent's scent as that of an enemy and that he must be rid of it. During the narrator's final announcement of "Break Dark Thunder Phenomenon!", an echo effect is implemented as well for dramatic effect.

As a guest fighter, Ikuro is the only playable All Star Battle character to not return in the next game, Eyes of Heaven.

Retrieved from "https://jojo.fandom.com/wiki/Ikuro_Hashizawa?oldid=339810"
Community content is available under CC-BY-SA unless otherwise noted.