Drowned whilst incapacitated after his Stand was damaged via Star Platinum

He is one of the many mercenaries sent by DIO to assassinate the Joestar Group on their way to Egypt. He secretly boards a vessel the protagonists were using for their journey and, after killing the ship's real captain, assumes his identity, with the intention of picking the group one-by-one. He is a Stand User, wielding the unique aquatic-based Dark Blue Moon.

The assassin appears as a tall, extremely muscular man possibly in his late thirties. His appearance is rather inconspicuous as he only has a blonde crew cut and a moustache, followed by a soul patch for his facial trait.

Though the reader is never shown the true Captain Tennille, one can assume that he was practically identical to the impostor, since his men, who had worked for ten years on the same ship, did not even suspect the replacement.

The impostor appears to be very patient, as he originally planned to separate the protagonists and kill them one by one. Once his schemes are spoiled by Jotaro Kujo, he does not lose his calm, saying that it will be no problem for him to kill them all at once from underwater. He also enjoys guessing what his enemies are thinking.

He also seems to be fond of the ocean, being rude towards Jotaro after seeing he was smoking and asking if he was going to throw the ashes and the cigar in the water.

The impostor's lung capacity surpasses the human average by three times, and through practice, he can stay underwater for more than six minutes without breathing.

The impostor is one of the Tarot Card representatives sent by Enya the Hag to kill the Joestar group. Seeing that the Joestar group decided to travel by sea after the attack of Gray Fly and how the captain of the ship looks just like him, he decides to kill the captain and take his place. He throws the captain into the ocean and boards the ship with everyone else, no one noticing that he isn't the real Tennille. He plans to kill the group one by one while inside the ship.

The impostor appears on a boat that Jotaro Kujo and company have taken to go from Hong Kong to Singapore. After Jotaro and Anne are attacked in the water by a mysterious creature, Jotaro has become suspicious of the crew members and believes one of them may be a Stand user.

Although Joseph Joestar insists that the Speedwagon Foundation had checked his credentials, Jotaro decides to find out if he is the culprit anyway by playing a bluff on him: he says that breathing even a minimal quantity of smoke causes a big vein to appear on the nose of a Stand user. The impostor Captain Tennille immediately falls for it, and reveals his true identity and that he had killed the real Captain Tennille earlier in Hong Kong Harbour.

He tries to take Anne hostage, but before he manages to do so he is stopped by Star Platinum. The impostor, however, drags Jotaro underwater with his Stand Dark Blue Moon, where his Stand can fight at full power. He traps Jotaro into a vortex, attempting to slash him with Dark Blue Moon's razor scales. He even manages to create some sort of little Cirripede-Stands that drain energy from his opponents' Stands.

Finally, by exploiting Star Platinum's ability to stretch his index and middle fingers, Jotaro stabs the enemy Stand and rips half of his head, defeating him, but in a last ditch effort, the impostor Captain Tennille blows up the ship, leaving the protagonists to meet their next Stand encounter, Strength. Tennille, however, is left to die in the sea.

Unlike the previous game, the events from Dark Blue Moon appear on the game with nothing removed. It appears as a "quick time event" mini-game in Super Story mode, where the player must dodge all the attacks from the impostor Captain Tennille's Stand. The mini-game can be replayed on Gallery Mode (Oingo and Boingo's book).

Close-up of the Impostor

The captain takes away Jotaro's cigarette 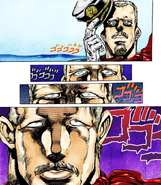 Impostor Tenille underwater with his Stand 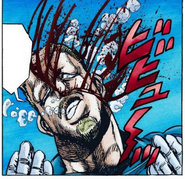 End of the Impostor

Impostor Tenille underwater with his Stand

End of the Impostor

Impostor Tennille and Dark Blue Moon in Heritage for the Future 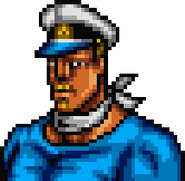