She appears to Emporio on the second occasion that Enrico Pucci resets the universe, apparently retaining Jolyne Cujoh's spirit (or standing for her as a sort of alternate universe counterpart).

Irene appears effectively exactly like Jolyne; besides having slightly longer hair, and a softer outfit consisting of a light, turtle-necked sweater cut above the navel, patterned by several heart-shaped gaps or holes.

Irene is friendly and rather carefree, having offered a ride she shares with her boyfriend, Annakiss, to multiple strangers (Emporio and the counterparts to Ermes and Weather Report). She also seems to have a better relationship with her father than her alternate universe counterpart Jolyne did, as she is going to him to ask to marry Annakiss. Like Jolyne, she also adopts a motherly attitude to Emporio.

After the universe is reset due to Made in Heaven, Emporio Alniño defeats Pucci and is transported to a random gas station. There he meets several alternate universe versions of his friends, including Irene and her apparent boyfriend, Annakiss. Soon after Emporio misses the bus, Annakiss and Irene offer to give him a ride, assuring him that they aren't bad people. Irene tells Emporio that they were on their way to meet with Irene's father in order to ask for his approval of her and Annakiss' marriage. As they talk, the rain starts up and Irene takes off her jacket and wraps it around Emporio. Emporio notices the Joestar Birthmark on Irene's shoulder and tells her his name. The group drives off, but not before Irene tells Annakiss to stop the car to give a ride to what appears to be an Alternate Universe Weather Report walking on the side of the road.

Irene's voice and lines appear during the final text-based cut scenes of the Stone Ocean STORY MODE, sharing her voice actress, Miyuki Sawashiro, with Jolyne. The text consists of her conversation with Emporio where she introduces herself and offers him a ride (reenacting the the original story line). 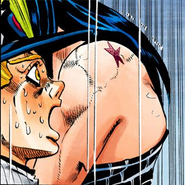 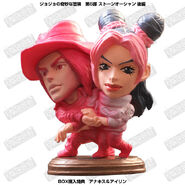