J. Geil is an assassin, the son of DIO's advisor Enya the Hag, sent alongside Hol Horse to kill the Joestar Group. He is also the murderer of Sherry Polnareff and the man Jean Pierre Polnareff seeks revenge from. J. Geil is a Stand User and wields Hanged Man.

J. Geil is a muscular man of average to above-average height whose most recognizable feature is his two right hands. He is exceptionally hideous, having a bald head with an abnormally high crown and gaunt-looking face with blank squinted eyes, a small nose, and a nearly toothless mouth.

He is shown wearing a plain shirt and trousers along with a leather jacket and arm warmers. During his introduction, he is also seen with a cap hiding his features but is never shown with it afterward.

J. Geil spends most of his time hiding from the public, preferring to have a partner in which to rely on. This made him a perfect candidate for Hol Horse, who liked him and believed that they should work in pairs. J. Geil would hide in the shadows while Horse broke the glass needed for his Stand to work; occasionally, they would do a combination attack, such as Hol Horse breaking some glass and J. Geil attacking while Hol Horse shot a bullet from his Stand, Emperor, locking the enemy into a mortal circle. He shared a special link to his mother, who received the same injuries he had moments before dying. Outside of combat J. Geil had an extremely twisted and depraved personality, being among the most reprehensible of DIO's minions. He made a regular habit of raping and murdering young girls, something he happily bragged about, showing zero remorse or regret for his actions.

Hanged Man is a Stand made of light, which is able to travel from one reflective surface to another and can attack someone's reflection, harming the true person as well.

J. Geil is the man responsible for the rape and murder of Sherry Polnareff, earning him her brother's desire for revenge. He also tried to kill Sherry's friend but failed. No one but Polnareff believed the girls' testimony on J. Geil having two right hands. It is later implied that he raped numerous girls before Sherry, as he says that he had many girls who "loved and admired" him, Sherry being just one of them.

J. Geil first shows by making his Stand appear in front of Polnareff and forcing him to separate from the rest of the group, making him an easy target for him and his partner Hol Horse. After a short confrontation between Emperor and Silver Chariot, Muhammad Avdol joins the fight but is quickly disposed of by a combination of the antagonists' Stands.

Polnareff is blinded by anger and is almost killed in the same way, but Noriaki Kakyoin manages to save him in time. The two escape with a jeep, but Hanged Man follows them and destroys the vehicle. At this point, Polnareff deduces J. Geil's Stand's true nature: it is made of light and can move between reflections at high speed and attack from there. Having guessed its location and trajectory, Silver Chariot manages to stab it, revealing J. Geil's position.

However, Polnareff and Kakyoin are once again tricked: J. Geil gathers a crowd of people and makes its Stand enter their eyes. The trick is spoiled by Kakyoin, who focuses the people's attention on a coin while Polnareff then kicks dirt in everyone's eyes and then cuts the fleeing Hanged Man with Silver Chariot. J. Geil attempts to flee but finds himself pinned against a gate with nowhere to run. Silver Chariot then finishes J. Geil with a flurry of stabs. Flung into the air from the final blow, J. Geil comes down hung upside down on a gate, becoming a visual metaphor for the Tarot card his Stand represented.

The events from "Emperor and the Hanged Man" take place in the game with no differences (being one of the few story arcs without drastic changes). J. Geil appears as the last enemy faced in this arc story.

J. Geil himself appears on the last cutscene within his Chapter in Super Story. His Stand, Hanged Man, is used as part of Hol Horse's moveset. As a special move, Hanged Man can appear from the ground and grab the opponent, rendering them unable to move. As part of one of Hol Horse's Super Combos, he'll crawl out of the ground and stab the opponent in the back and deal massive damage, but only if the opponent is caught in one of the three cracks that Hol Horse shoots into the camera screen. 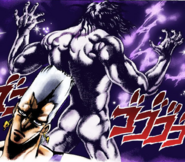 J. Geil in past

Killing a snake with his Stand

J. Geil in the OVA

J. Geil in Heritage for the Future