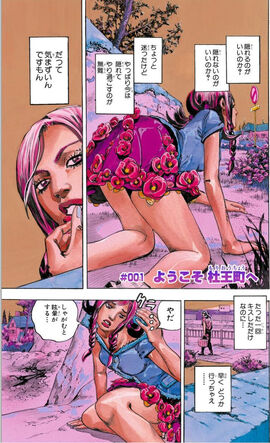 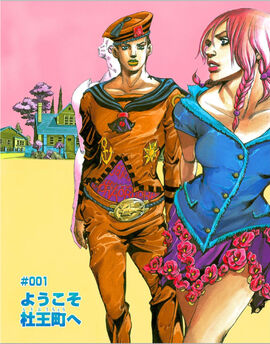 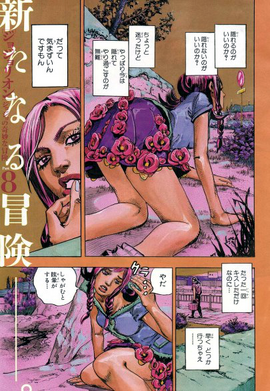 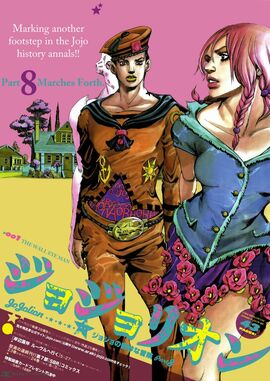 June 2011
Welcome to Morioh Town (ようこそ杜王町へ, Yōkoso Moriō-chō e), originally The 'Wall Eye' Man (「壁の目」の男, "Kabe no Me" no Otoko) in the UJ release, is the first chapter of JoJolion and the eight hundred forty-eighth chapter of the JoJo's Bizarre Adventure manga.

The story takes place in an alternate reality of the previously established town of Morioh from Part 4: Diamond is Unbreakable.

Morioh has undergone a huge earthquake and giant unnatural protuberances, called "Wall Eyes" have sprung out of the ground across the town, splitting it in two. While hiding from a stalker, a girl finds a mysterious man stuck under some earth, with a bite-shaped wound around his star-shaped birthmark. Assuming he might have some kind of infectious disease, the girl decides to not approach him and calls the fire department. She takes a picture of his wound with her phone and gives the fire department her name, Yasuho Hirose. Yasuho then asks the man for his name, but he can't seem to remember who he is. On her phone, the image of the birthmark somehow shows a bubble floating above the shoulder, the birthmark having disappeared. Suddenly, the man starts to sink into the ground, but Yasuho grabs his arm and pulls him out, revealing the man to be completely naked with the exception of his hat.

A man named Joshu Higashikata, as revealed by Yasuho, suddenly appears and spots Yasuho and the mysterious man, much to her displeasure. Joshu, seeing Yasuho and the man in an embarrassing position, flies into a rage, believing that the man is seducing Yasuho. In an attempt to kill him, Joshu shoves Yasuho out of the way, armlocks the man and tries to bash his head in with a rock. Just as Joshu is about to strike the man, a bubble flies from his star-shaped birthmark. When the bubble pops, Joshu's eyes disappear as well leaving him temporarily blind. Panicking because of his sudden blindness, Joshu cannot avoid the gut punch from the mysterious man and faints, having retrieved his sight.

Yasuho then narrates about the origins of a curse based on different interpretations. All interpretations are different but incorporate an ominous element, therefore curses should be broken. Asking herself many question about the man she just saved, Yasuho also mentions with astonishment that said man had four testicles.

Retrieved from "https://jojo.fandom.com/wiki/JJL_Chapter_1?oldid=316442"
Community content is available under CC-BY-SA unless otherwise noted.