Tsurugi Higashikata's Goal, and the Architect 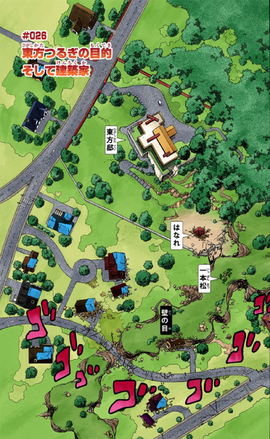 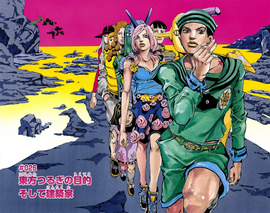 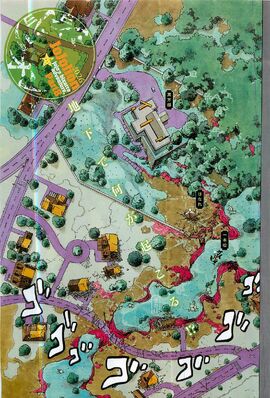 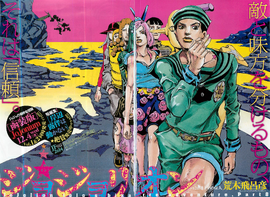 December 2013
Tsurugi Higashikata's Goal, and the Architect (東方つるぎの目的 そして建築家, Higashikata Tsurugi no Mokuteki, Soshite Kenchikka), originally The Basement Dwellers (地下室の住人, Chikashitsu no Jūnin) in the UJ release, is the twenty-sixth chapter of JoJolion and the eight hundred seventy-third chapter of the JoJo's Bizarre Adventure manga.

Trapped again in the secret room below the Higashikata estate, Yasuho gives up in her escape. Tsurugi appears again, apologizing for the trouble he caused her. After small talk, he explains to her the origin of Stands, about Paper Moon King and a strange illness that affects the first child of each generation of the Higashikata family. Tsurugi finally leaves after making sure Yasuho is fine, and she falls asleep.

A strange man going by the name of Yotsuyu Yagiyama mysteriously appears within the secret room, watching Yasuho sleep. With his Stand power he attempts to suffocate her with a sheet of film, in an attempt to draw out Paisley Park so that he may examine it. Once Paisley Park manifests, he uses his Stand to trap it in place, and seems to be able to identify Paisley Park's unique abilities, such as it being a long-distance type Stand.

While she is still trapped, he reveals that he is an architect and he is trying to scout out interesting properties, such as the secret room, and that he hopes that Josuke never retrieves his memories, appearing to know more than he lets on. Yasuho, in a last ditch attempt to free herself, manages to fold an origami bunch of bananas, which she successfully uses to trip Yagiyama, as they are still powered by Tsurugi's Stand Paper Moon King. Yagiyama falls onto a piece of broken glass that Yasuho had earlier tried to use to cut the film on her face, and in the confusion his Stand's power weakens, which frees Yasuho from the film. However, by the time she's been freed, he has already mysteriously disappeared.

Retrieved from "https://jojo.fandom.com/wiki/JJL_Chapter_26?oldid=325749"
Community content is available under CC-BY-SA unless otherwise noted.