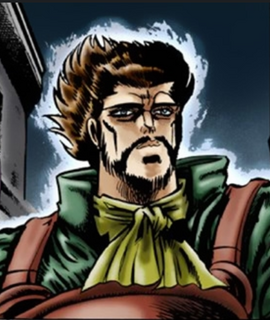 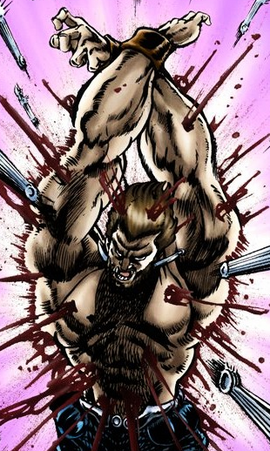 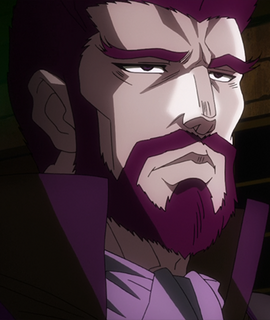 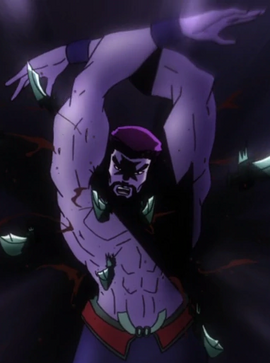 Chapter 6 - A Letter from the Past, Part 1 (First mentioned)

Jack is a serial killer who meets Dio Brando and is transformed into a Zombie sent to fight the Joestar Group. He was inspired by the historical figure of the same name.

Jack the Ripper was an adult man of average height and muscular build. He possesses a regular haircut and a full short beard.

First seen with a full suit, he would go bare-chested when transformed into a Zombie and hide a number of daggers in his body.

Jack the Ripper is shown to have a gentlemanly facade, able to convince a woman to walk with him on a dark night. When he reveals his true colors, he does not hesitate to stab the unarmed woman to death. This trait becomes even worse when he's turned into a Zombie as he becomes even more cruel and insane. Jack is shown to have a desire only to cut things and cause pain.

After being turned into a Zombie, Jack becomes even more insane than he was as a human. Incapable of feeling pain in his undead state, Jack uses this to his advantage - inserting sub-dermal scalpels all over his body. Jack also has incredible speed, demonstrated by his being able to kill a man, decapitate two horses, and hide inside the body of one in a matter of seconds.

Scalpels: With the scalpels buried in his body, Jack is able to expel them merely via muscle contraction. He then throws these knives with pinpoint accuracy over great distances.

Monstrous Knife: Re-modeled from a Dark Ages torture instrument, Jack uses the knife to cut his foes to shreds.

After killing his final victim as a human, Jack was approached by a then-incapacitated Dio Brando who saw the evil in the man's heart and decides to make him the first of his zombie minions. Refusing at first, Jack accepted after a failed attempt to kill Dio. (In the anime, Dio instead hypnotizes Jack to come forward so that the former could suck his blood to turn him into a loyal zombie servant.)

Later, he corners Jonathan Joestar, Robert E. O. Speedwagon and Will Anthonio Zeppeli in a tunnel on their way to Windknight's, decapitating their coachman along with the horses as he hid in one of them. Once revealing himself, Jack proceeded to throw the coach wagon into the mouth of the tunnel to prevent Jonathan and his companions from escaping. Zeppeli, fighting Jack to prove a point about Ripple energy and courage, manages to wound the zombie as he escapes into a labyrinth hidden in the tunnel, intending to attack from the darkness. Zeppeli gives Jonathan the task to finish off Jack as his final test, giving the youth a wine glass to pinpoint Jack's location on the other side of a wall, JoJo eliminates Jack with a well-aimed Sendo Hamon Overdrive, surging through the brick wall and melting Jack.

Jack appears as a boss fight in two chapters. In the first, the player must defeat him using Zeppeli as the battle has a time limit.

In the second battle, the player takes control of Jonathan, as Jack keeps running around the stage, trying to perform surprise attacks with his torture instrument. During the battle, a small glass of wine appears in the corner of the screen, indicating Jack's presence by visibly vibrating.

Jack can be played in some battles in EXTRA MODE. His special move allows him to launch all the scalpels in his body at the opponent.

Jack appears as one of the several Part 1 characters who possess a metal striker. His FINISH Move has him using the torture device on the defeated opponent. If defeated, Jack's metal striker will drop a knife, if any other metal striker gets near it, they'll lose some health points. 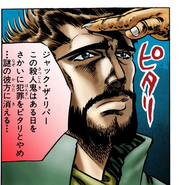 Jack as a zombie

Jack hiding in a horse 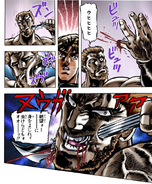 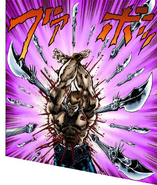 Jack and his knives 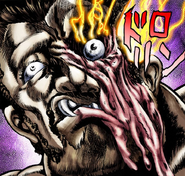 Jack disfigured by Will A. Zeppeli 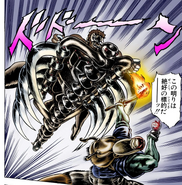 Zombie Jack the Ripper as depicted in the Anime

Jack The Ripper As He Appears In The OVA's Timeline Videos 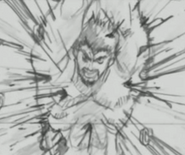 Jack The Ripper Ejecting Knives From His Body