The Holy Saint
The Saint

Unknown; Physically dead and body scattered, appears in visions near parts of the corpse

Appearing in proximity to the Saint's Corpse, although never confirmed as such,[1] this figure is named once as[2] and heavily implied to represent the biblical and much-venerated Son of GodW in ChristianityW, Jesus Christ.

In the chapter that tells of his history, Jesus wears long, dark hair, his body covered in scars, and a heavy robe. His face is never seen, obscured by the shadow of his hair or his robe.

In his later appearances, he is seen mainly from behind or with his face largely in shadow. He wears long, dark hair; and is variously clean shaven, with a mustache, or a light beard.[2] Wearing a crown of thorns, his body is covered in scars, and his hands bear Holy Wounds.

Like the original, Jesus in Steel Ball Run is solemn and direct, inspiring awe in everyone he meets as a messiah.

His Corpse integrating most readily with Funny Valentine and Lucy Steel; in his living capacity he favors Blackmore and Johnny Joestar most of all, to whom on one occasion he relates special advice.

Lucy Steel's Stand, Ticket to Ride , may be taken as the Stand of Jesus' complete Corpse or living self. This Stand redirects misfortune, sending it afar, to rest elsewhere and nullify, or potentially on other people around the planet.

The Parts of Jesus' Corpse occasionally merge with the analogous body parts of individuals coming into contact with them, upon which some develop unique (Stand) powers.

In JoJolion, the nature of the Corpse's power is described as the power "to remove" (e.g. healing by removing disease).

Rarely, as a living person, Jesus may appear and/or speak to individuals.

According to the story in the manga, after Jesus' resurrection, he thanks Joseph of Arimathea for the care of his body and states that he will travel to the east. When Joseph asks him about a future meeting, Jesus makes a map in the sand, showing Joseph nine locations.

Jesus then travels east across the continent, learning new languages and cultures, until he reaches the sea. Making a ship with the help of the locals, he crosses the sea, arriving in a new land where he lives, ages, and finally dies. Having formed a connection with the natives, prior to his death, they state that they "wish to see him again".

Shortly after his death, a great earthquake tears the ground apart and a great storm rages, dividing his corpse into nine pieces, which by the movement of the wind, sand and animals are relocated further eastward, to the nine locations on Joseph of Arimathea's map, spanning North America.[3]

Jesus' Corpse is initially taken for that of another saint. For varied and intensely personal reasons, several characters in the SBR race seek to collect his Corpse Parts.

In the initial chapters, a relationship between the Corpse and the Devil's Palm is described, this area granting a Stand to anyone making contact; later revealed that the Devil's Palm was generated when Jesus finally died and a natural disaster reshaped the land.

Blackmore is the first to perceive the presence of a living Jesus. Awed by this revelation, he lowers his guard to be fatally shot by Lucy Steel.[4]

During his fight with Axl RO, Johnny receives advice from Jesus, helping him overcome the Stand Civil War; after which Funny Valentine steals all the Corpse Parts from Johnny and Gyro.[2]

Later, fleeing from Valentine, Lucy happens upon the stolen Parts and somehow becomes pregnant despite being a virgin, discovering the Corpse's head in her womb and later developing a Stand. 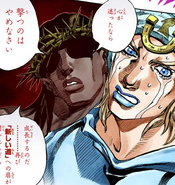 Johnny receiving advice from Jesus
Add a photo to this gallery

Retrieved from "https://jojo.fandom.com/wiki/Jesus?oldid=389441"
Community content is available under CC-BY-SA unless otherwise noted.