The game features 52 playable characters (53 with first print bonus), ranging from Phantom Blood to JoJolion. It was announced on Famitsu's January 15, 2015, issue and was presented at Jump FestaW 2015.

The game format is that of effective 2v2 matches between four characters, although either four players or two players and two CPUs will play. However, the game doesn't allow for local multiplayer but only online multiplayer in 1v1 or 2v2 matches.

During a match, each team has to deplete the enemy team's health gauges first before the end of the round. To do so, the characters have access to either basic attacks (a normal attack used to string basic combos and a powerful attack with combo-specific properties that can also be charged to perform an unblockable takedown) or special skills. Skills usually take the form of unique, powerful abilities that can inflict higher damage to an opponent, but can also prepare/provide a number of advantages and bonuses when used. Each character usually has one skill they can occasionally perform that has notably more potent effects or damage compared to others, but also a greater cooldown.

Defensively speaking, a player can either block an attack to greatly reduce the damage taken and potentially counter, or dodge with a fast but short side-/back-step. Aside from evasion, Sidestepping can also be used to cancel out of attacks or certain skills in order to extend ground combos, or interrupt an unsafe maneuver.

Certain match-ups contain special animations and dialogue between two characters, mostly between allies in the form of unique, fully animated and cinematic Dual Heat Attacks. However, these have no effect on gameplay aside from altering the angles and distance opponents are sent when struck by a DHA.

All characters possess a Style Action, a singular special ability that predominantly acts as their main skill or unique gimmick, and is often representative of their Style and abilities as a fighter. For some characters, such as Rudol von Stroheim or Koichi Hirose, a Style Action takes the form of core abilities integral to their playstyle; although for others such as Jotaro Kujo or Giorno Giovanna, their Style Actions may take the form of limited-use, tremendously powerful abilities that accessorize or augment their skill set. While Style Actions have little commonality, as their roles and utility differ between the playable characters, they ultimately share the trait of being important in how every fighter operates in combat.

The Story Mode includes a level system and ability tree for each character, and each playable character levels up using XP earned from Story Mode battles and missions, up to Lv. 50. Characters are originally available within the Story Mode with an incomplete set of techniques and lowered stats. These parameters can be unlocked by fighting with them and using the point rewards gained from levels to unlock a technique or improve the character's various stats in the tree. Stats such as health and attack strength automatically grow upon a character leveling up, and require no points. After battles you will be presented with the choice of specific rewards such as costumes and extra colors. These rewards will expand depending on your grade during battle. These grades expand from D,C,B,A,S.

Aside from recovering skills and abilities that were otherwise already available to the character as part of their core moveset, the ability tree also features upgrades granting exclusive enhancements not available in the standard Free Battle. Among these upgrades are reducing stamina consumption, reducing the cooldown on Flash Bursts and Flash Cancels, and increasing the effectiveness and duration of abilities beyond their normal limit. As a result, playable characters are functionally inferior to their Free Battle counterparts at Lv. 1, but eventually grow to surpass them in all areas when the tree is complete.

Like in JoJo's Bizarre Adventure: All Star Battle, characters are categorized by Battle Styles which change how each character plays in the game, as well as their different strengths and weaknesses. "Ripple User" (波紋使い, Hamon-tsukai), "Vampire" (吸血鬼, Kyūketsuki), "Mode" (, Mōdo), "Stand User" (スタンド使い, Sutando-tsukai), and "Mounted" (騎乗, Kijō) return from All Star Battle (with slightly different names), while Eyes of Heaven adds "Ogre Street" (, Ōgā Sutorīto) and "The Prime Example of Superior German Science" (ゲルマン民族の最高知能の結晶, Geruman Minzoku no Saikō Chinō no Kesshō, literally "The Greatest Crystallized Intelligence of the German People") to the game. Vampires and the Mode-using Pillar Men still recover damage over time, unless the damage was dealt by a Ripple-enhanced attack, and also they can be paralyzed by ultraviolet lamps made from Superior German Science.

Also new in Eyes of Heaven is that characters that were previously classified in All Star Battle as having one Battle Style but displayed abilities of another are now classified as having two Battle Styles. For example, Old Joseph Joestar is now classed as both a Ripple User and a Stand User, while in the previous game he was only classified as a Stand User who happened to have Ripple-based abilities and attacks as well.

The game features an original storyline supervised by Hirohiko Araki[3] and centers around a major timeline and universal interference within the JoJo universe affecting characters across all arcs, as well as the Saint's Corpse Parts.

Dual Heat Attacks (デュアルヒートアタック, Dyuaru Hīto Attaku, DHA) are cinematic team combo specials that can be activated once the Dual Heat Gauge is filled in a match. Its activation sound effect is similar to the Time Stop sound effect from All Star Battle.

Most DHA's consist of the secondary player attacking briefly, followed by the player who initiated the attack performing a cinematic move reminiscent of an HHA or GHA from All Star Battle.

Some specific character combinations, however, have Special Dual Heat Attacks, with their own unique name and cinematic animations, usually recreating scenes from the manga or completely new scenarios.

Stages are designed as large, dynamic 3D environments with varying altitudes. Much like All Star Battle, most contain gimmicks, hazards, and situation finishes. When a certain Situation Finish is performed on the correct character on the corresponding stage, a colored manga panel is displayed.

These Stages only appear in Story Mode. 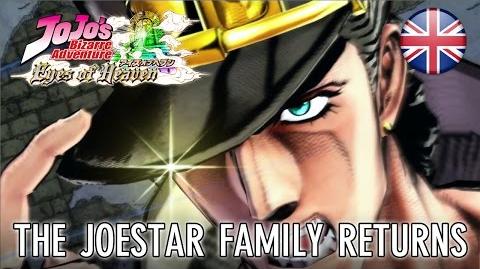