Up to 2 players simultaneously

It was originally released as an arcadeW game on December 2, 1998 on the CPS-3W board system; this version was known outside Japan as JoJo's Venture. An updated version of the game was released on September 13, 1999, as JoJo's Bizarre Adventure: Heritage for the Future (ジョジョの奇妙な冒険 未来への遺産, JoJo no Kimyō na Bōken Mirai e no Isan), becoming the sixth and last game released for the CPS-3W. Console ports of this version for the PlayStationW and DreamcastW were released later that year, while a high-definition version titled JoJo's Bizarre Adventure HD Ver. was released for PlayStation Network and Xbox Live Arcade in August 2012.

The games were developed by the same team responsible for the Street Fighter III series. The game combines Capcom's trademark anime-inspired graphics, as seen in the DarkstalkersW series, with the colorful characters and events of Hirohiko Araki's creation, resulting in a highly stylized and detailed visual style. It also features many of the gameplay mechanics seen on previous Capcom fighting games, such as the use of power gauges for super moves, as well as a brand new Stand Mode, where a character's Stand can be summoned or dismissed at will by the player, resulting in variations on the character's move list and abilities.

Hirohiko Araki served as a consultant for the game and created exclusive pieces of artwork for its promotion and packaging; most notably, he developed from scratch a new character design for Midler, since Capcom was interested in using her in the game and she had been only vaguely shown in the original manga. Araki patterned most of Midler's revised design from Yukako Yamagishi from Diamond is Unbreakable, having similar body builds.

The game prominently features illustrations straight from the manga, some with unique touches just for the game. Most notable in the game is the face-shot of a defeated enemy if finished off with a super combo move, whose animation also reflect the kind of damage received; the portrait would be riddled with bullet holes, bisected or bloodied, depending on the finishing move.

Later revisions of the games include shoutouts to other parts of the series.

This game and its revisions were among the first pieces of JoJo-related media released in North America, exposing the series and its characters to many western players and audiences for the first time.

The basic gameplay mechanics are those of a standard fighting game: one-on-one battles consisting of two or three time-limited rounds, in which the goal is to deplete the adversary's health bar using both regular attacks as well as character-specific special and super moves, which require the input of button combinations and/or spending accumulated energy, outputted in a power gauge which fills with every time damage is dealt or taken.

The game uses a simplified 4-button control scheme, consisting of three attacks (light, medium, and heavy) and a Stand button, which switches the character's Stand On and Off (see Stand Mode below)

Fighting with the Stand Mode "On" enhances both the character's offensive and defensive abilities; these improvements heavily depend on the character and Stand, but some common ones are for example double jumping, absorbing residual damage when blocking special attacks, powered-up special moves, etc.

Most of the game's specific mechanics derive from the introduced Stand Mode. For example, attacking the physical manifestation of the opponent's Stand will mirror the effects to its wielder; this is a crucial strategic element, since many of the special moves and attacks send the Stand away from the User, adding the difficulty of protecting both of them at the same time; if a main character is damaged while their Stand is far away, the damage received is doubled. On top of the usual health bar and power gauge, there is a third meter, the Stand Gauge, which decreases when the Stand is damaged and refills when the Stand Mode is switched off; if this gauge is depleted, a Stand Crash takes effect, and the character is paralyzed and wide open to any attack for an instant.

Other features of the Stand Mode include summoning the Stand with an instant attack, the possibility of "programming" attack patterns on the fly and unleashing them at will, "releasing" the Stand and controlling it directly, and so forth.

Some characters lack an "active" Stand, though; some of these "passive" Stand Users introduce even more complex and specific mechanics into the game, such as Hol Horse's Emperor, a gun Stand, or Mariah's magnetic Stand Bastet.

The functions of each Stand create strong differences between the characters, and force often radically different offensive approaches for each one; this "character-dependent gameplay" style would be later present in posterior fighting games, such as the latter entries of the Guilty Gear series, which, interestingly enough, also contains Rock and pop music references.

If certain attacks of the same strength and same intensity occur and collide at the same time, clashing occurs. This only happens with characters with an Active Stand. It is hard to see this system in action as it happens very seldom. This mechanic would later be incorporated into future JoJo games, such as All Star Battle In some cases, clashing can lead to a Blazing Fists Match. (see below)

One of the lesser-known features of the game, but also one of the more impressive, is a Blazing Fists Match, caused when two certain opposing special moves performed by certain characters at the very same time collide; the player/s are then prompted to rapidly tap the attack buttons to win the duel and decide who will receive damage, a feature first seen in Samurai Shodown. This feature has since been adopted and expanded in All Star Battle.

Across the game, and if certain conditions are met, the player will have to clear special stages and face secret opponents. In these battles, special rules are applied in order to reenact certain chapters of the original manga that were less "translatable" under the normal circumstances of the 1v1 battles.

The Super Story mode has a last minor gameplay feature known as "secret factors". As nods to the story of Stardust Crusaders, playing out the scenario akin to official canon will activate these factors. If the player activates the scenario correctly, it gives them a high ranking upon winning the scenario. This is a unique feature that also celebrates its source material and rewards fans and readers of the series.

Up to 2 players simultaneously

JoJo's Bizarre Adventure: Heritage for the Future (ジョジョの奇妙な冒険 未来への遺産, JoJo no Kimyō na Bōken Mirai e no Isan) is an updated version of the game, released on September 13, 1999, on the CPS-3W arcade system. This version featured eight additional playable characters and adjustments to the game for balancing purposes.

Differences between JoJo's Venture and Heritage for the Future

A PlayStationW port was released on October 14, 1999, which features all characters and some modes from the CPS-3W arcade version. The port is noted to have a few unnoticeable missing frames and lower quality sprites due to hardware limitations, however, it includes an exclusive "Super Story Mode" that adapts the entirety of Part 3, as well as a mini-game that could be played on the PocketStationW. The port does not include the "challenge mode" from the arcade version, and several visual effects had to be downplayed to improve performance on the PlayStation.

The game primarily uses the motif of JoJo's Venture, while the character select screen is from HFTF.

The Super Story Mode uses cutscreens similar to the CPS-3 game, but with major graphics downgrade. It does, however, feature characters and scenarios not found in the arcade game, most notably in character sprite form.

Failure to complete the Super Story Mode scenarios does not impede progress, and the character is allowed to continue as many times as necessary. However, some branching paths require revisiting a particular chapter to backtrack and play other chapters. If the chapter introduces a new mechanic, an instruction guide will be displayed first prior to the game's proper starting.

Several enemies that weren't present in the previous version make an appearance uniquely in the story mode, sometimes accompanied by a change in gameplay:

A DreamcastW port was released on Oct 31, 1999, featuring assets and performance that matched closer to the original arcade version. Along with improved gameplay and shorter loading times, this version includes an "Alessi Mode," but does not have the "Super Story Mode" present in the PlayStation port.

The Dreamcast version features an Alessi Mode, which allows de-aged characters to be played in a set of rules (Both players fighting as the kid counterparts for the whole round or the characters turning into children during a Stand Crash). This mode is unlocked by finishing Challenge mode with Alessi.

JoJo's Bizarre Adventure HD is a high-definition port of the game that was released for both PlayStation NetworkW and Xbox LiveW.

The game, apart from upscaled graphics, includes tweaked dialogue and fonts as well. Notably, it uses the super chime from the first JoJo's Venture, similar to the earlier Dreamcast port. Transparency has also been properly applied, replacing the sprite flashing once used. There are options to use the original graphics style, however.

The HD re-release was delisted from Xbox Live Arcade and PSN in September 2014.[1] It is assumed that this is a result of Capcom no longer holding the license to create or distribute JoJo's Bizarre Adventure games, which was acquired by Bandai Namco Games.

The HD update features the option to play in either the classic arcade-style or an “Arcade SD Mode,” which has pixel-like art like the original games. Unlike the PlayStation port, this version of the game does not include the "Super Story Mode."[2]

The game supports online play that includes the ability to filter opponents by location and connection speed, similar to the lobby systems seen in newer Capcom fighting games such as Super Street Fighter IV and Marvel vs. Capcom 3.

The online mode introduces a new eight-player multiplayer mode where players can compete (while waiting to compete) for a chance to compete in the final showdown. 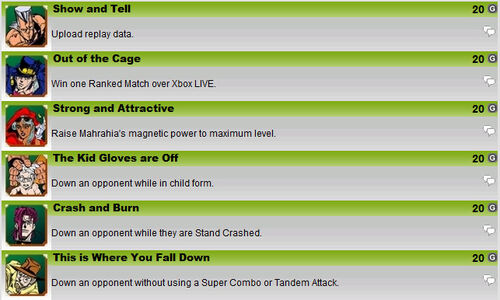 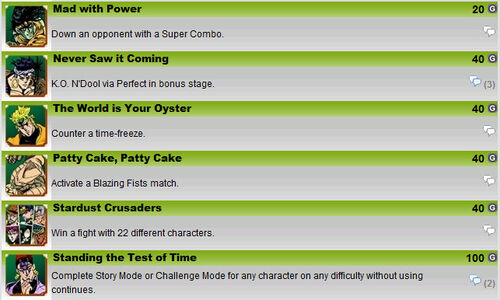 Differences from the manga and anime

Many of the names in the game's English localization have been changed due to copyright or other issues. The following are name changes that are significant: 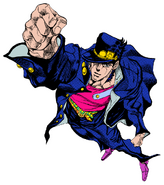 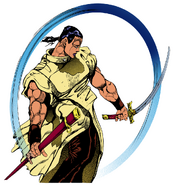 Old Joseph's Special showing flashbacks of his youth from Part 2 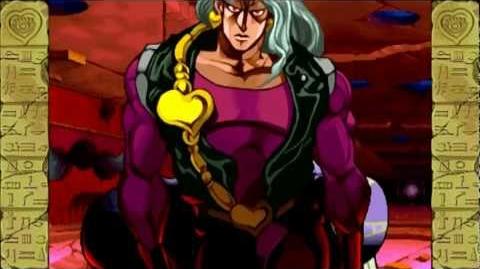 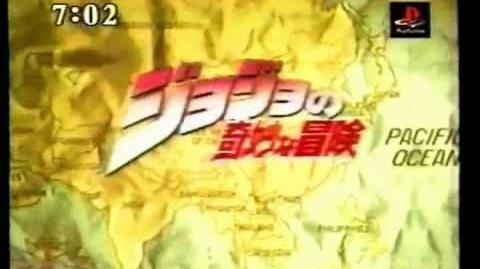 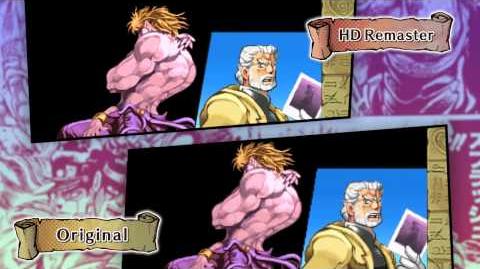 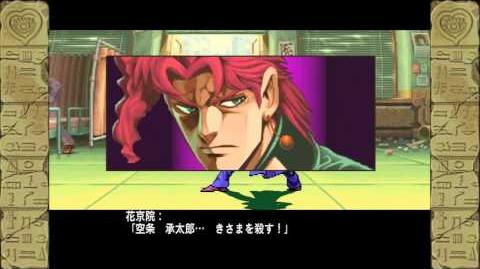 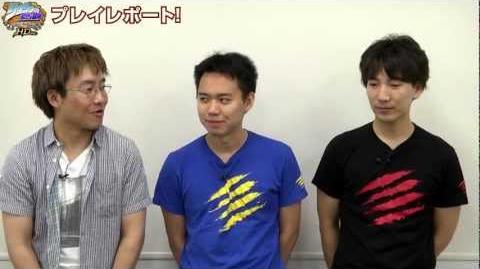