Official Website
JoJo's Bizarre Adventure: Last Survivor (ジョジョの奇妙な冒険 ラストサバイバー, JoJo no Kimyō na Bōken Rasuto Sabaibā) is a multiplayer battle royaleW game based on the JoJo's Bizarre Adventure franchise for arcades. It was first announced on December 18, 2018,[1] and was initially set to release in summer 2019 but was delayed to winter 2019.

A location test for a beta version was done in January 2019.

JoJo’s Bizarre Adventure: Last Survivor is a 3rd person battle royale action game. The game will support up to 20 players in a single match and feature characters from Parts 3, 4, and 5 of the series.

The players each control one character and roam in a vast map, whose effective size reduces gradually as a dangerous zone progressively engulfs the environment. It is shown that the players are deployed randomly on the map in predetermined square zones. They then must fight each other, depleting the enemy's health bar until one is depleted and the enemy is eliminated. Players will need to utilize their Stand powers to be the last person standing.[2] Depending on the mode, players can also be split into distinct sides instead with allies fighting together and being able to be revived.

The player can perform basic attacks, charged attacks, or use their Stands' special abilities. For instance, Star Platinum can stop time immobilizing enemies for a short timeframe. Characters with long-distance ranged Stands can send their Stands away from them controlling them at the same time to attack other characters while they hide. Any action, from walking to attacking others, creates noise that is also visually indicated through Katakana onomatopoeia appearing on the screen, allowing other players to hear/see what is happening nearby. It is possible to sneak around by walking while crouching.

Unique to Last Survivor (not found in any other battle royale games, however Darwin Project has a system a bit similar in the form of Darwinium, the game's ability upgrade currency in matches) is the ability to level up your character. Players level up by collecting poker chips from fallen enemies, similar in style to those produced by Daniel J. D'Arby's Stand Osiris. By leveling up, players will gain access to more of their Stand's abilities. An example of this is that Jotaro must be level 4 in order to use Star Platinum The World's Time Stop. 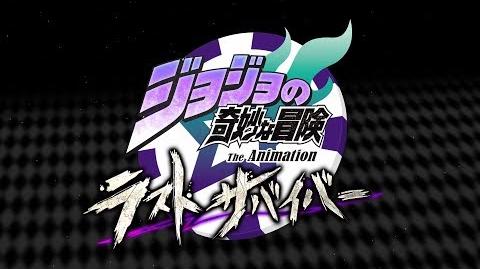