Official Website
JoJo's Bizarre Adventure: Stardust Shooters (ジョジョの奇妙な冒険 スターダストシューターズ, JoJo no Kimyō na Bōken Sutādasuto Shūtāzu) is a free IOS/Android game released in 2014 exclusively for Japan. The game is a mobile spin-off of JoJo's Bizarre Adventure: All Star Battle and initially focused on the first three parts of the series: Phantom Blood, Battle Tendency, and Stardust Crusaders. As of December 2015, Diamond is Unbreakable was added, and as of September 2018, Vento Aureo was added.

The game uses the touchscreen as the main form of interaction, allowing the player to input commands using their fingers. Combat against enemies is done using Medal, particularly "Striker" Medals, each of which represents one character and their ability set. Like some card battler games, players must take into account a medal's available health and special attacks as well as take advantage of combo systems that will chain stronger attacks together.

The game contains characters seen in the first five parts of the series. Every character can be selected as one of the main party, containing a total of up to 5 characters (4 at the beginning of the match and 1 for backup).

(A majority of Finish moves are done by each individual's Stand) 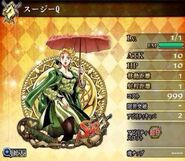 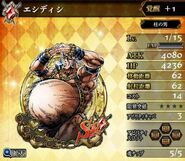 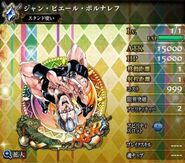 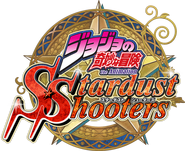 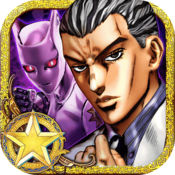 Some of SS characters.

Jotaro's color in the game (same as the Anime).