The event featured a live concert with music from THE DU, batta, Karen Aoki and Daisuke Hasegawa, and also included the primary cast from the Part 4 anime, along with numerous works of art and merchandise.

After the initial showing, a DVD of the event will be released on July 26; showcasing special events, announcements and the concert itself. 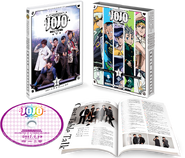