Shot in the head via Whitesnake

SO Chapter 20 - Prisoner of Love

Johngalli A (ジョンガリ・Ａ, Jongari Ē) is a minor but influential antagonist featured in Stone Ocean.

Johngalli A is a blind assassin directly responsible for framing Jolyne Cujoh and sending her to Green Dolphin Street Prison. He is one of DIO's last servants and ambushes Jolyne and Jotaro Kujo inside the prison. Johngalli A is a Stand User, and tries to snipe the Kujos with the help of his Manhattan Transfer.

Johngalli A is a man of average to above-average height and medium build. He has long, light hair, including a small braid bordering the left side of his face; and his cheeks are marked by a thin, vaguely tribal symbol. Johngalli A. has cataracts, making his irises appear entirely white.[3] He also possesses a tattoo of Earth on his back.

Johngalli A. wears a plain shirt and dark trousers, which feature regular nearly full circular cuts, so that round patches dangle from the clothes. He also wears a holed tie with a square end.

As a loyal follower of DIO, Johngalli A shares his plan with Enrico Pucci. However, Jotaro notes that Johngalli A. may have never met DIO in person despite his loyalty.

Aiming to take revenge on the Joestar family, he participates in the plan to frame Jolyne Cujoh for murder and works towards killing her and Jotaro Kujo inside the prison.

An ex-soldier, his sentence is 7 years, for murder.

Johngalli A's Stand is Manhattan Transfer, adding to his sensitivity to the motion of air, and able to redirect his bullets as shot directly at it.

Although Johngalli A is blind, he is an adept sniper. He disguises his rifle as a cane which he keeps on his person.

Johngalli A is introduced as a forgotten follower of DIO who wants nothing more than the deaths of Jotaro, DIO's killer, and his daughter Jolyne. He terrorizes the two with his Stand, Manhattan Transfer; able to redirect bullets towards them as shot from a separate building in the prison.

While the two avoid Johngalli A's onslaught, they are subjected to Whitesnake's illusion. While hypnotized, Johngalli A travels to the other building, disguised as a guard. As Jolyne and Jotaro awaken, they are attacked by him. He is stopped by Star Platinum as it stops time, but Jotaro is attacked by Whitesnake, having his discs taken. Johngalli A shoots at Jolyne as she tends to the collapsed Jotaro but the bullets are redirected away from Jolyne via Stone Free. Johngalli A realizes his miscalculation of focusing on Jotaro rather than Jolyne, as she defeats him.

Later, Whitesnake shoots him in the head, before planting the gun on his body, so that others would deem the event a suicide.

Johngalli A with his sniper rifle disguised as a cane 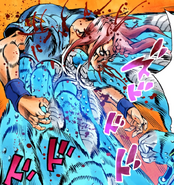 Johngalli A defeated by Jolyne

Johngalli A killed by Whitesnake