One-Shot
Jolyne, Fly High with GUCCI (徐倫、GUCCIで飛ぶ, Jorīn, Gucchi de tobu) is a full-color one-shot manga featured in the February 2013 issue of Shueisha's women's fashion magazine, Spur on December 22, 2012. It is the second JoJo-related one-shot published in Spur.[1]
The one-shot was made in collaboration with creative director Frida GianniniW of GucciW and was inspired by her 2013 Cruise collection.[2]

Jolyne, Fly High with GUCCI features the protagonist of Stone Ocean, Jolyne Cujoh; as well as several characters from Vento Aureo. The story is set in an independent continuity which contradicts the event of the series.

The story starts in an airport, where Jolyne is waiting for a plane for Tokyo. Ten days beforehand, her mother died from an illness. Jolyne is later seen thinking about how her mother had her clothing tailored to fit Jolyne before she died.

Then, Jolyne turns to see a small blue unicorn looking at her, with three men close by. Two of the men, Bucciarati and Abbacchio, are government agents. The other, Polpo, is a citizen who has lost a pet.

Bucciarati says that the animal is very important to the government and asks to search Jolyne. When she refuses, Bucciarati looks at surveillance footage where Jolyne is seen with the pet, shown to be the unicorn she saw earlier. The unicorn is bleeding, and Bucciarati warns Polpo about the consequences of potentially harming it. Then, Jolyne is seen kneeling down in front of the camera. When she gets up, the unicorn has disappeared.

Bucciarati corners Jolyne, telling her to hand it over or be arrested. Jolyne, confused and in tears, still refuses, saying that it would be all alone in a strange country. When Bucciarati goes to apprehend her, he notices the unicorn on her scarf.

Passing out of view under Bucciarati's tablet computer, the unicorn emerges in the appearance of a white, adult unicorn. Jolyne concludes that she is dreaming, but that the dream is a message of hope, and that it is "power". 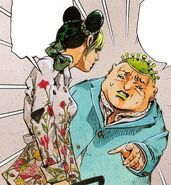