Judgement (ジャッジメント（審判）, Jajjimento) is the Stand of Cameo, featured in Stardust Crusaders.

Judgement appears as a large, mechanical humanoid robot. Barrel-chested, it wears massive shoulder pads and has three fingers of a metallic sheen on its hands. A piece in the shape of a round helmet sits atop the left side of its head. Its design is inspired by Jinzo Ningen Kikaider and Kamen Rider by Shotaro Ishinomori.[1]

Judgement bursts out of a lamp, claiming to be a genieW named Cameo and acts friendly, goading Polnareff into expressing wishes.[2]

However, it soon reveals itself as Judgement and exposes its pleasure at turning the wishes of his victim against themselves.[3]

The stand represents the Tarot Card, JudgementW. The Stand's nature, however, seems more consistent with the card's symbolism in reverse: casting doubt and deceiving people into making poor decisions.

Judgement is a fairly powerful Stand, having above average strength and speed as far as Stands go and is able to clash with Silver Chariot and come out without a scratch.[2] Its large metal body is particularly hard to damage. However, it yields against more brute-force Stands like Magician's Red[4] and relies on tricking unwitting victims to use their wish against them.

When Judgement was beaten by Magician's Red, even though its eyes were popped, its head was blown off, and its arm and side cracked and shattered, Cameo didn't have a scratch on him when he was discovered.[4] This suggests that Judgement is one of the first automatic Stands after Empress which for its part was synchronised with its user.

Judgement's unique power is to create clay constructs out of humans' deepest desires[5] but it will turn the wishes against its victims. This is a representation of Judgement's power; to toy with a person's heart. The fakes are nearly perfect: fake treasures will have the weight and texture of real gold[2] and fake people will have the appearance (although Judgement purposefully makes them more monstrous), voice and memories of the real person.[5]

Passing as a genie, it tricks Jean Pierre Polnareff into wishing for his sister to come back to life and then used his emotional power to form a visage of her out of the dirt. However, Sherry's clone tried to devour Polnareff, who couldn't muster the strength to hurt his sister's figure.[3]

A close-up to Judgement's lamp 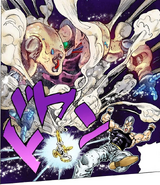 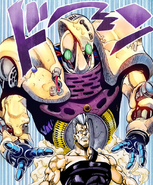 Treasure appearing from the wish

A fake Sherry and a fake Avdol created by Judgement 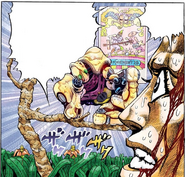 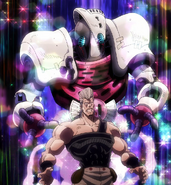 Treasure appearing from the wish 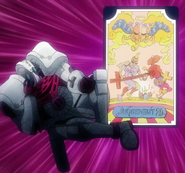 Judgement's sprite animation from Heritage for the Future