Justice (ジャスティス（正義）, Jasutisu) is the Stand of Enya the Hag, featured in Stardust Crusaders.

Justice primarily takes the appearance of a massive cloud of fog, being large enough to envelop a small cemetery. When materialized, it appears as a skeletal phantom wearing a large crown decorated with jeweled arches and a spike on top, with the clouds of fog swirling around its head and hands like a robe. The skull of Justice also lacks some teeth. In the anime, it has two right hands, much like its user, Enya, and her son.

In the colored manga, Justice is portrayed as being entirely purple. In the anime and OVA, it is portrayed as having a white skull with a golden crown and green hands emerging from the fog.

It represents the Tarot Card JusticeW. The card normally symbolizes consequences and a need to recognize them, but the symbolism is twisted in Enya's case. The Stand personifies her obsession with revenge against the world and particularly those who slight her and her son.

Justice is a terrifyingly powerful Stand because of its very nature and power. Despite the ridiculous way Jotaro defeated it, Justice is one of the most powerful Stands in the series due to its quasi-invulnerability as a fog Stand and ability to control anyone's body through an open wound.

Justice's foremost power allows it to control the bodies of others through an open wound.[1]

When someone is wounded on any part of their body (to facilitate this, Enya uses a pair of scissors to cut people), the victim's flowing blood will be absorbed into the fog and Justice then creates a perfectly clean, round hole on the victim which can pierce through a sufficiently thin body part like the wrist or the tongue.[1]

Justice then sends a string of fog into the hole like thread tied to a puppet and takes control of the associated body part like a puppeteer. Enya can then make the controlled parts move as she wishes, being able to throw Polnareff to the ceiling[2] or make Hol Horse shoot himself.[1]

Justice's puppetry power is so powerful it can take control of dozens of corpses and manipulate them with precision, which can result in a large band of puppets under the control of Justice.[3] Despite being mere skeletons, the puppets appear as normal humans, though with deformed features and holes all over their body.

Justice can manifest incredibly realistic and detailed illusions anywhere within its range.

Enya was able to generate an entire illusive city over a graveyard, with the impression of actual solid buildings that only vanished when she was defeated,[4] and nearly killed Joseph Joestar by disguising a metal fence as their car and tricking him into jumping onto it.[5] Moreover it can also disguise the skeletons she takes control of as living humans who can converse with others.[5] In the OVA series, Enya also uses her mist to take the appearance of an attractive woman.

Justice generates an illusive city over a graveyard 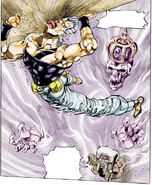 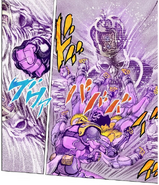 Being a fog, any physical attack will go through Justice 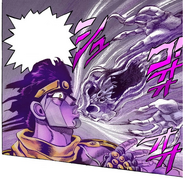 Justice appearing with its Tarot Card