Ken is an ordinary child made into a Stand user by Yoshihiro Kira and prompted into challenging Rohan Kishibe in a game of rock-paper-scissors in which the latter must gamble his own Stand. Ken's Stand is named Boy II Man.

Ken is a young boy of short stature, slim build, and medium straight hair. His attire consists of a headband, open ankle-high sandals and shortallsW with both straps on one shoulder; the garment is adorned on all sides by several large safety pins.

On his left cheek, is a large hole produced after being impaled with the Arrow.

Ken's wish is to become an adult who is respected just as much as Rohan. He has no real knowledge of Stands at the start, but he quickly learns more as the match progresses. He is decisive in his actions, willing to sacrifice himself after being defeated and taking a baby hostage to get another match against Rohan. He heavily believes that luck is on his side, even though most of the time his luck is quite pitiful. Rohan describes him as a typical bouncy kid with an ordinary life and no family problems upon using Heaven's Door on him.

Boy II Man is a Stand who enables Ken to steal someone's Stand when the latter participates in a game of rock-paper-scissors 5 rounds long with him and loses. Each round lost causes the victim to lose a third of their power to Ken. An ultimate win from the victim's part gives back the full Stand.

Ken fell off a telephone pole, resulting in a hole in his left cheek. This hole was likely caused by the Stand-creating Arrow that Yoshihiro Kira used to create new Stand users in Morioh. Being a huge janken (Rock Paper Scissors) fan, he challenges famous mangaka Rohan Kishibe after running into him. Rohan, very annoyed by his presence, uses Heaven's Door to cheat and chase him away, but Ken appears again, and Rohan plays a game in the hopes that if Ken wins, he will leave him alone.

However, Ken's main intention was to win over Rohan's "mind power" by defeating him in janken, as he believes it means he would surpass him as a person as well. When he finally wins after several defeats, his Stand absorbs a little of Rohan's Stand power and starts to learn about Stands. He is tricked by Rohan in their last match, who teaches him how to surpass himself and turn luck to his side instead of just relying on it. Thinking it was unfair, he takes Shizuka hostage and Rohan agrees to battle him again, but, this time, Ken is defeated fair and square.

Not accepting his defeat, he throws himself in front of a truck, but Rohan jumps with him and both are almost ran over. The truck driver misses after accidentally having his vision blocked by Yoshihiro Kira. Seeing that luck is really on Rohan's side, Ken admits defeat. Rohan then says he likes Ken because he can take decisive actions. 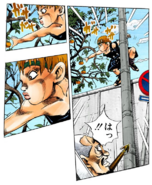 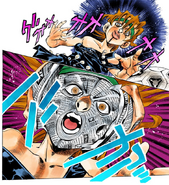 Ken under the influence of Heaven's Door 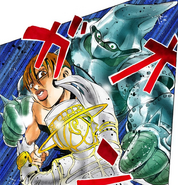 Ken standing in a shower of falling glass shards 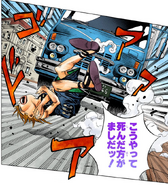 Ken cries after losing to Rohan for the first time.

Ken threatens Rohan to play with him.

Furious after his second defeat.

Resisting the powers of Heaven's Door.

Ken giving off a menacing vibe with Yoshihiro Kira in the background.

Testing his luck by standing in a shower of falling glass shards.

Ken's final round of janken with Rohan.

After his losses, Ken tries to commit suicide.

Ken turns over a new leaf. 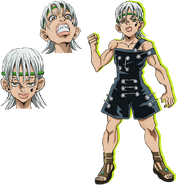 Ken (within his cheek void) featured alongside Kira's minions in the third opening, Great Days.