SO Chapter 66 - The Secret of Guard Westwood, Part 7

Kenzou is an elderly inmate at Green Dolphin Street Prison, and the former guru of a sect. He is sent to assassinate Jolyne Cujoh in the maximum security ward. He eventually battles Foo Fighters instead when it comes to save Jolyne. Kenzou is a Stand User, and wields Dragon's Dream.

Kenzou is a small yet athletic old man, with a heavily wrinkled and clean-shaved face, but he has unusually long eyebrows over slanted eyes. He has several thin braids on the back of the head.

Kenzou wears a furred bodysuit open on the chest, a jeweled skullcap on which are several big pearls, and a similarly jeweled necklace.

Kenzou believes that the secret to good health is "urine therapy" (drinking his own urine) every morning.[3] His prison card also states that he has knowledge of Kung-Fu, Tai Chi, and tea ceremonies.[2]

Dragon's Dream manipulates the concept of Feng-Shui to show the luckiest angles, and is used by Kenzou to strike from odd angles for maximum lethality. It is remarkable in being neutral in a fight and equally usable by Kenzou's foes.

In his youth, Kenzou was the leader of a very popular cult that included Hollywood stars and other famous people. At one point, he and the thirty four members of his cult made to burn themselves alive; however, only Kenzou himself would survive. He subsequently received a total 280 year-sentence in prison for this crime, and endeavored to climb back up to the upper echelons of society where he could relive his former glory.[2]

Kenzou seemed to be a private assassin who was sent to Green Dolphin Street Prison maximum-security facilities were he was hired along with D an G to assassinate Jolyne Cujoh and her friends. His favorite technique involves him jamming his hand down the victim's throat, breaking their fourth vertebra which connects to the kidneys in the process. As this removes all the oxygen from the victim's lungs, they are left to drown in the adrenaline which is created by the lack of moderation around the kidneys due to the fourth vertebra being broken, effectively 'drowning' his target.

He fights against F.F., and while his attacks were deadly to humans, F.F.'s unique biological structure made the fight difficult for him. F.F. initially succumbs to his 'drowning' technique, but as she realizes how Dragon's Dream works, she manages to put him in an electric chair, at the expense of having her clavicle bisected. While F.F. goes to find some water to recover, Kenzou, still alive, attacks Jolyne, only to have Anasui inform him that he placed Diver Down inside of Jolyne. The fight ends with Kenzou's legs being broken into spring-like appendages due to the effects of Diver Down.

Kenzou introducing himself and the basic operations of his lifestyle

Kenzou with his stand, Dragon's Dream 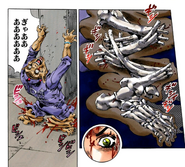 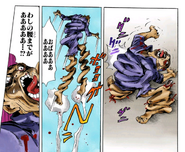 The prolonged effect of Diver Down