She is the wife of Mr. Hirose and also the mother of Ayana Hirose and Koichi Hirose.

Mrs. Hirose has short dark hair, styled as a side swept pixie cutW. She has moderately thick eyebrows and eyes that appear similar to her son's. She is always seen with lipstick and also wears earrings when going shopping in the manga.

Her initial outfit consists of a striped buttoned T-shirt along with a skirt and slippers. A small triangle-shaped brooch with a heart design is on the front of her shirt below her neckline. When going shopping, Mrs. Hirose carries a purse and wears a vest on top of a long sleeve shirt with light pants.

Koichi's mother is an energetic woman. She is cheerful and appears friendly to any stranger, as shown when she allows Tamami Kobayashi into her house,[3] compliments Rohan Kishibe, and gets along with Koichi's friends.[4]

She frequently goes to the hair salon called Salon Glance and calls her son Ko-chan. Mrs. Hirose can be slightly gullible, as she is tricked into believing Tamami's lies.[3] When her guilt is amplified by The Lock, it drives her to the point of wanting to commit suicide because she couldn't handle having raised a son who would steal money and stab someone. However, her faith in her son frees her conscience because she knows Koichi would never harm anyone.[5]

Mrs. Hirose is greeted by Tamami, who makes up a story about how he kindly found the 7,000 yen that her son dropped and wanted to bring it back to him. She lets him into her house while they wait for Koichi to come home from school. As Koichi returns, he finds Tamami massaging his mother's shoulders and praising her with fake compliments.

Tamami claims that when Koichi bumped into him with his bicycle, they accidentally exchanged wallets and that his contained over 500,000 yen. Tamami adds weight to his accusation by commenting that the wallet in Koichi's possession contains a bill from a dinner he had the night before, and to Koichi and his mother's surprise, the bill is indeed in the wallet. Tamami asks Koichi's mother whether she feels guilty for raising such a trouble-making son, and despite Koichi's protest, The Lock appears on her chest. Tamami tells her that he won't be satisfied with 500,000 yen alone and may also take the house's mortgage, taunting her that it's the woman of the house who usually takes care of these things.[3] Koichi's mom and Ayana are pushed out of the room while Koichi confronts Tamami.[6]

After a loud scream from Tamami, she runs back into the room to find him bleeding with the knife in Koichi's hand. Unaware that Tamami had actually cut himself in order to frame Koichi, The Lock on Mrs. Hirose's chest multiplies in size due to her guilt. Koichi's mother cannot bear her guilt and takes out a knife, preparing to stab herself with it. Tamami orders Koichi one last time to stop the sound, but he answers that he won't stop, but emit another sound. He shouts "Believe me!" toward his mother, imprinting the sound on her with Echoes. The sounds make her realize that she has to believe her son, and her guilt disappears.[5]

Mrs. Hirose and Ayana are out shopping when they stumble upon Koichi and Rohan. Surprised to meet a famous mangaka, she calls him amazing and requests to come with them to Kameyu Department Store. Yukako is frustrated that of all people, Koichi's mother had to show up because she had hoped to be alone with Koichi.[4] 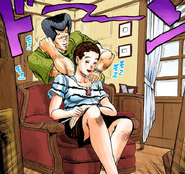 Happy to be praised 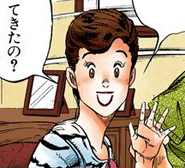 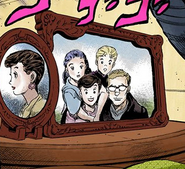 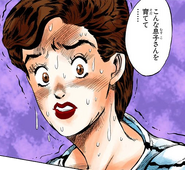 Affected by The Lock due to her guilt 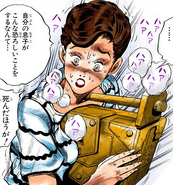 About to commit suicide

Echoes imprints "Believe me!" on her 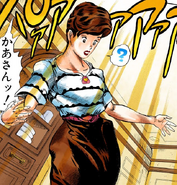 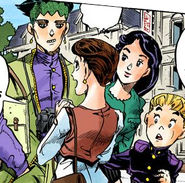 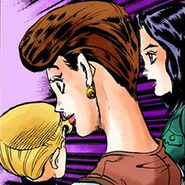 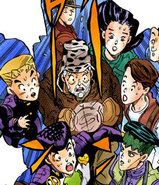 Affected by The Lock due to her guilt

Shocked about Koichi holding a knife

About to commit suicide

Echoes imprints "Believe me!" on her

Mrs. Hirose and her daughter safe from Tamami

Yukako annoyed that Koichi's mother and sister showed up

Startled from Joseph and Josuke charging through the crowd