Kraft Work appears almost robotic, with smooth, streamlined armor. It has a spike on each side of its head, bared teeth, and eyes patterned with vertical lines. It also features striated muscles, possibly as a reference to its ability.

In the colored manga, Kraft Work is presented as being mostly white with yellow eyes, blue "skin" underneath its armor, and yellow stripes on its face and torso. In the anime, Kraft Work is primarily green with red eyes and orange decals on its head, legs, and feet. Kraft Work's teeth are much less bared in the anime than in the manga.

Kraft Work is a close range Stand characterized by above-average basic abilities. It is notable for being able to deflect bullets with ease, indicating exceptional speed.[2]

Kraft Work's primary ability is the manipulation of kinetic energy, either taking away an object's kinetic energy completely, freezing it in place, or adding more kinetic energy to a previously frozen object, making it move once more.

Kraft Work can take the kinetic energy out of anything it touches, locking those objects in place.[2] This can either take the form of making an object be stuck to a particular space or making it motionless with respect to another object, including Sale himself. Kraft Work also allows Sale to make people partially stuck in place after they come in contact with something Kraft Work has affected. There is no limit to the number of objects Kraft Work can freeze in place, and the immobilization can be delayed after Kraft Work has touched it, allowing Sale to throw things in front of them and make them stop them mid-air.[3]

Kraft Work can also be used defensively, as it can freeze any projectile that it comes in contact with, even if it has already started to enter Sale's body. Sale uses this to stop a bullet from penetrating his skull.[2] However, an external force can still move said object, if even by a small amount; thus a bullet stopped inside Sale's head can be pushed deeper inside by a second bullet.[4]

If Sale moves far enough from immobilized objects or people, the effects of Kraft Work's ability will eventually dissipate.[2]

Kraft Work can also add kinetic energy to frozen objects, such as using the bullets it stopped from Guido Mista's gun as weapons against him.[2] By repeatedly touching a locked object enough times, Sale can build up kinetic energy in it before releasing it; he is thus able to launch a bullet with as much power as a real gun. However, to conserve accuracy as well as prevent adversaries from predicting where it will fly, he must carefully and lightly tap the object several times.[3] 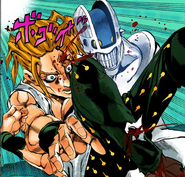 With Kraft Work's power, Sale builds energy into a bullet... 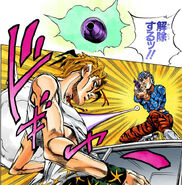 ...then releases it, sending it back at Mista

Stopping Mista leave from the truck

Attempting to deflect a bullet sent back by Mista's Sex Pistols...

...which splits in half, continuing to fly towards Sale

Kraft Work and its user in Uragirimono no Requiem