Tomb of the Boom 3

L.A. is the youngest member of the Boom Boom Family along with his father Benjamin and his older brother Andre. Participating in the Steel Ball Run, he attacks Johnny Joestar and Gyro Zeppeli to eliminate competitors.

L. A. is a young man, with long flowing hair, and shadowed eyes. He wears the same dotted suit as his family with a target imprinted on the chest and wears goggles on his head.

L.A. is shown to have low academic skills, for instance being unable to do basic math. Along with being prone to uncontrollable emotional outbursts, he is also extremely naive, believing that his mother was a stork because Andre told him so.

He is generally emotionally dependant on his father and brother. Likewise, he looks up to his brother like a young child would. Despite the constant verbal abuse from both, L.A. doesn't mind their insults, and is attached to them, becoming furious when his father dies.

Compared to the other members of his family, he seems to be of lower intelligence, but has sudden moments of keen observation which are only met with his family's scorn. For this, Benjamin calls him 'the family's smartass'.

Main article: Tomb of the Boom 3

The Boom Boom family's Stand, Tomb of the Boom, grants every member with the ability to manipulate iron in different ways. In L. A.'s case, it allows him to manipulate iron sand to immobilize his victims. He is capable of killing a person by extracting iron-rich blood from someone and kill them. L. A.'s Stand manifestation also seems to be the most combat-oriented of the family.

After his brother Andre tricks Gyro and Johnny and manages to transform the first into a human magnet, Benjamin and L. A. attack them unsuccessfully. However, Benjamin quickly elaborates a new strategy, turning Johnny and Mountain Tim into magnets too. Leaving Andre alone, L.A. and Benjamin trail Tim and the protagonists, but before the magnetism can kill all three, the cow-boy uses his Oh! Lonesome Me to stop himself from colliding with Gyro and Johnny.

L.A. and Benjamin are forced to approach the trio. L.A. uses his Stand to immobilize Gyro and Johnny and Benjamin cuts Oh! Lonesome Me, forcing the three to collide, almost killing them.

However, Johnny awakens a Stand Power and cuts Benjamin in two, as well as severing one of L.A.'s feet. With his father lying in his arms, L. A. reveals that their actual goal was killing Gyro in order to earn his bounty. Even if all members of the Boom Boom family are doomed, L. A. says that Gyro won't see the end of the race, because other people will try to be rid of him.

After their father's death, it is unknown what happens to him and his brother.

Riding in with his father

Believing Andre to be dead 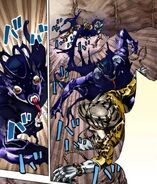 Tomb of the Boom in action

Trying to kill Johnny by extracting his blood

With his dead father in his arms, swearing revenge 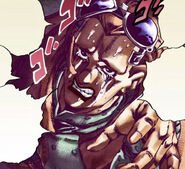 Crying
Add a photo to this gallery

Retrieved from "https://jojo.fandom.com/wiki/L._A._Boom_Boom?oldid=344541"
Community content is available under CC-BY-SA unless otherwise noted.