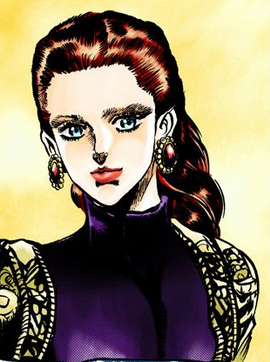 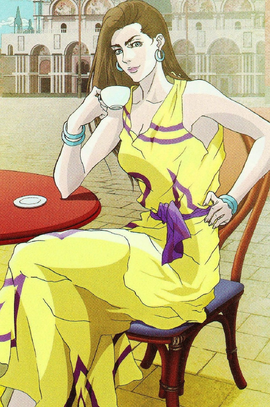 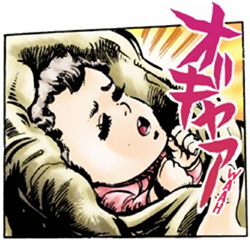 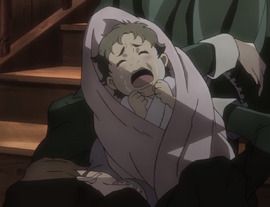 Lisa Lisa is the wife of George Joestar II and the mother of Joseph Joestar. A powerful Ripple master, she acts as mentor to both Joseph and Caesar Zeppeli. Residing in Venezia, with an initially unknown past, she leads the Ripple Users' efforts in battling the Pillar Men, later revealing her connection to Joseph during the end of Battle Tendency.

Lisa Lisa is a tall and fit woman. Beautiful and poised, she has light eyes and long, dark hair.

Her most known clothes were worn during the last fight with Kars. She wears earrings, a dark strapless dress with shorted-skirt, black pantyhose, a pair of high heels and a long, Ripple-conducting scarf. Occasionally she also wears a pair of aviator sunglasses.

Lisa Lisa is like any Ripple master, a dignified and courageous woman, facing the Pillar Men without fear, and confidently confronts any challenge she encounters, especially in regards to fighting someone. Lisa Lisa takes some pride in her fighting ability and tells Joseph that she doesn't need a youngster like him to win.[2] Lisa Lisa is constantly portrayed as a brave woman, being able to bluff Kars into sparing her and Joseph when they are surrounded by vampires without letting any emotion transpire[3] and in the past, immediately killed the zombie who murdered her husband George II, forcing her to hide in Europe.[4]

As the master of Caesar and Joseph, she skillfully employs harsh and apparently life-threatening training for her students and is severe to Joseph, whose antics she doesn't tolerate during his training.[5][6] Being the de facto leader of the Ripple Users, she is an authoritative leader and reminds everyone that their emotions are secondary to their goal of defeating the Pillar Men. After Caesar's death, Lisa Lisa tries to maintain an insensitive facade, telling Joseph to immediately focus on the fight. However, Joseph points out her loss of composure, upon which she breaks down in tears, illustrating her deep feelings for Caesar as a student and comrade.[7]

Otherwise, Lisa Lisa behaves like a normal and elegant woman. She managed to reknit another life after her battle against the Pillar Men threat, notably marrying again and coming to live in the United States.[8]

Illustrating her talent and skill, she first appears standing on an oar on a surface of the water, turning it into a high bar on charged pillars of water. It is mentioned during the events of the chariot arc that her Ripple is at least three times more powerful than Joseph's.[9] Her ability for training others results in Caesar and Joseph's rapid growth into Ripple masters in their own rights.

Snake Muffler (, Sunekku Mafurā): Lisa Lisa's primary method of fighting involves a scarf made with the yarn of the Satiporoja beetle (サティポロジアビートル, Satiporojia Bītoru), which can conduct the Ripple at 100%. She can channel her Ripple through her scarf to stand upside down, leaving the now rigid scarf the only part of her in contact with the ground. She may also use the sensitivity of the scarf to detect life signs and know the direction of incoming attacks, even when out of sight.

Elizabeth was a baby who, with her mother, was present on the boat attacked by Dio Brando at the end of Part 1. After Elizabeth's mother was killed by a zombie in an attempt to protect her, Jonathan Joestar saved her and handed her over to Erina to keep her safe while he fought Dio, asking Erina to live for her sake and the little girl's. Erina (pregnant at the time with George II) and Elizabeth were the only living survivors of the destruction of the boat.

Elizabeth was subsequently adopted by the Ripple user Straizo and learned the art of Ripple from him until her 18th birthday. During this time, Straizo entrusted her with the Red Stone of Aja.[1]

As a young adult, Elizabeth eventually married George II, and they had one child, Joseph. George, unfortunately, was not trained properly in the art of the Ripple and was killed by his higher-ranking military official after discovering that he happened to be a zombie who had served Dio. Elizabeth murdered her husband's killer and burned him to ash. In order to avoid retaliation and legal repercussions for having been caught in the act of murder, the Speedwagon Foundation helped her to erase all evidence of her existence.

Under the name Lisa Lisa, she first appears as a mysterious Ripple user whom Joseph meets in Venice.

She soon reveals herself to be Caesar's mentor and trains Joseph in the ways of the Ripple (starting with giving him a mask to modify his breathing and hitting him in the head with an oar) before joining in the fight against the Pillar Men as a powerful Ripple user in her own right.

She is shown to possess the Red Stone of Aja and mentions that destroying it would make fighting the Pillar Men just that much more difficult hence why she keeps it on her person. Esidisi manages to steal the stone from her when she was taking a bubble bath and attempted to attack her while she was naked and vulnerable while possessing her maid Suzi Q but is saved with the help of Joseph and Caesar. She is also the one who defeats Wired Beck.

It is eventually revealed that she is Joseph's long-lost mother, despite her youthful appearance. She is gravely wounded in her one-on-one struggle with Kars. After defeating his double, she is stabbed in the back from the real Kars' light blades but manages to survive.

Lisa Lisa personally reveals to Joseph that she is his mother later after Joseph's "funeral". She eventually remarries a Hollywood screenwriter in 1948 when she is 60 years old.[10] It is mentioned that Joseph talked to her about the Joestar Birthmark at an undisclosed period of time.[11] It's possible she may have died after the events of Battle Tendency, or before the events of Stardust Crusaders. In the Stand Proud opening, Many images of deceased/deathly ill Joestars are shown above Jotaro, with Lisa Lisa being one of them.

Lisa Lisa makes a cameo appearance in the Capcom arcade game. When Joseph performs his "Teachings" super move, images of Lisa Lisa briefly appear as Joseph whispers her name while he blasts the opponent. If the same super move is done by "JOJO" (Part 2 Joseph), Caesar will appear instead of Lisa Lisa.

Lisa Lisa makes her first playable appearance in the PS3 game as a DLC character (along with Old Joseph, as part of Campaign #2, named "Ripple Masters"). As a Ripple-user character (along with Jonathan Joestar, Will Anthonio Zeppeli, Joseph [Both Parts 2 and 3], and Caesar), Lisa Lisa can recharge her Heart Heat Gauge through "Ripple Breath" by holding down the Style button, performing a pose, as well as deliver enhanced versions of skills if Style is inputted in place of normal attack buttons. As a Ripple master, Lisa Lisa's Ripple Breath replenishes the HHG faster than most other Ripple users, being roughly 150% of the normal rate and tying with Zeppeli's for fastest in the game.

All of Lisa Lisa's moves begin or are part of a "Ripple Chain" exclusive to her playstyle, allowing her to successively chain as many moves together as she desires. However, there are recovery gaps in-between looping attacks so as to prevent the chain from becoming an inescapable perpetual combo.

Lisa Lisa's HHA, "Super Aja", begins with her holding the Red Stone of Aja high above her head. After a short delay of channeling Ripple power into it, she fires off a powerful laser at a downward angle. The HHA is unblockable. If the opponent is hit, they will be knocked to the ground as Lisa Lisa states that she has to protect the Stone.

Lisa Lisa's GHA, "I dare you to try it!", is as a counterattack. Lisa Lisa twirls her scarf around her similar in fashion to a ballerina. If the opponent's non-Throw melee attack hits, they'll be knocked into the air via a blast of Ripple. Wrapping the scarf around the opponent and using the Ripple to trap them, Lisa Lisa says that it is Satiporoja Beetle-thread, conducting 100% of the Ripple. She will rapidly assault the airborne helpless opponent with a flurry of Ripple-infused punches and kicks, all whilst noting that the scarf was specially made and expensive. Lisa Lisa finishes by delivering a final back-flipping kick as she retrieves the scarf. Notably enough, this GHA deals roughly 37% of the opponent's max health in damage, making it the second most powerful Great Heat Attack in the entire game, bested only by Diavolo's, whose GHA deals 42%.

Lisa Lisa also appears on the stage "The Battlefield" as a background character along with Kars. If Joseph is one of the combatants ingame, Lisa Lisa will cheer him on. This is assuming that Lisa Lisa herself is not part of the fight.

Lisa Lisa always starts the match wearing sunglasses; If she get hit by a HHA/GHA, she will drop them on the stage (making her the only character in the game who can lose an item of clothing during a match). Lisa Lisa's alternate costume features her Italian Oarsman's outfit worn during her debut; By wearing this costume, a mask will replace the sunglasses.

Lisa Lisa was confirmed for the game alongside Pet Shop.

As a Ripple User, Lisa Lisa has a Ripple Gauge that determines the strength of her attacks. Filling up the gauge will automatically empower her Normal and Powerful Attacks, and enhance/alter the properties of all her skills. It will also shorten the cooldown time on said skills. Using skills will drain a portion of the Ripple Gauge until there's an insufficient amount to use.

If paired with Jonathan Joestar, Lisa Lisa will respond with excitement for the chance to fight alongside her savior and father-in-law.

Unlike the previous game, where her main outfit consisted of clothing she wore during the early portion of the Switzerland arc, her attire now reflects the one worn during her battle with Kars, though her main pose is based on the cover of Chapter 72. The costume's color is also based on her anime appearance.

Lisa Lisa is paired with Funny Valentine in the Eyes of Heaven Tournament, but was eliminated in the preliminaries by Wamuu and N'Doul. 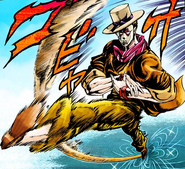 First appearance, disguised as a gondolier 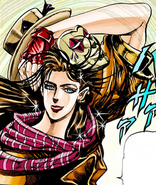 Close up of Lisa Lisa 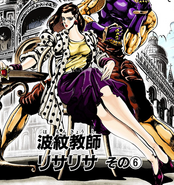 Worried about Joseph and Caesar

Lisa Lisa and Joseph take a moment to mourn Caesar

The backside of her battle attire

Wary, being stalked by Kars 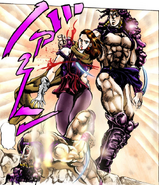 In a photo, being held by Straizo

In her past as Elizabeth Joestar

Elizabeth with her son and husband

Lisa Lisa running away after killing her husband's murderer

Demonstrating the power of the Super Aja to Joseph and Caesar

Lisa Lisa performing a Ripple technique with her scarf

Lisa Lisa tricked and defeated by the real Kars

Lisa Lisa with the others surprised to see Joseph alive

Lisa Lisa at the end of Battle Tendency

Lisa Lisa in the ending credits 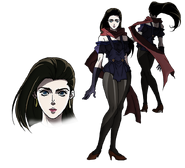 Lisa Lisa As She Appears In The OVA's Timeline Videos 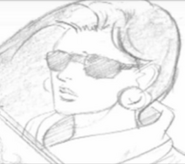 Lisa Lisa Being Given The Photograph Of Erina Holding A Baby

Lisa Lisa Getting Ready To Fight

Lisa Lisa Getting Attacked By Kars 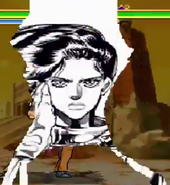 Lisa Lisa's cameo in Heritage for the Future

Lisa Lisa without sunglasses during her HHA, ASB

Lisa Lisa Costume A in All Star Battle 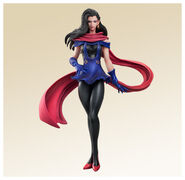