Love Deluxe (ラブ・デラックス, Rabu Derakkusu) is the Stand of Yukako Yamagishi, featured in Diamond is Unbreakable.

Love Deluxe is bound to the hair of its user Yukako. Because it is bound to an object, Yukako takes no damage from her hair being attacked or cut. This also makes it visible to non-Stand users.

Love Deluxe is bound to Yukako's hair, allowing it to grow to various lengths and move with considerable strength and dexterity.[2]

Love Deluxe is precise enough that the hair can tie something as small as a tongue, but is also powerful enough to completely bind and immobilize someone.[3] When angered, Yukako can unleash Love Deluxe and make her hair grow so long, it can cover and invade an entire house.[4]

Yukako is also able to shoot strands of her hair at opponents, which she then controls freely. As she takes no damage when the hair is destroyed, Yukako can then grow these strands of hair to make them reach dangerous hazards, such as fire nearby, igniting people on fire as well[2] but also throw people around.[5]

Her hair will turn white from too much stress should Yukako herself take enough damage or overuse it.[6]

Yukako attacks Koichi with her hair

Love Deluxe at its most powerful 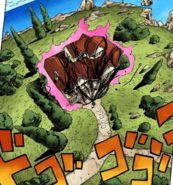 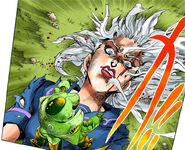 A silhouette of Love Deluxe.

Love Deluxe (alongside Cinderella) featured in the second opening, chase.