Lovers (ラバーズ（恋人）, Rabāzu), is the Stand of Steely Dan, featured in Stardust Crusaders.

Lovers is, unlike most Stands, of microscopic size, enabling it to infiltrate the human body unnoticed. It resembles a robotic humanoid creature with an insectoid head and with crab pincers for hands.

Its design is a combination of a fly, a flea, and the robot from the 1986 science fiction film Short CircuitW.[1]

It represents the Tarot Card The LoversW, which symbolizes the forming of a bond between people.

Although it obeys Steely Dan's command without question, Lovers also displays its own personality. It has a sly and sneaky temperament and taunts its opponent in combat. Although it recognizes its weakness, it also considers itself terrifying because it has mastered its own strengths and is confident that it can beat both Silver Chariot and Hierophant Green.[2] When pushed into a corner, it will flee.[3]

By Steely Dan's own words, Lovers is very weak, unable to even lift a single strand of hair.[4] Because of its microscopic size, Lovers is by itself very vulnerable. However, its ability to infiltrate the brain makes it nonetheless a formidable and elusive Stand that is very difficult to reach and its reach of hundreds of kilometers makes escape impossible.[4]

Lovers' primary ability is to enter the brain of its victim, more precisely the brain stem,[5] and manipulate their pain receptors.[6] When Steely Dan feels any physical stimuli, be it the pain from a punch,[6] or even the sensation of cracking his fingers,[4] Lovers will go berserk inside the brain and return the pain several folds to its victim, causing them agony. It can even cause phantom pain in absent limbs.[4] It is used to take Joseph Joestar hostage.

Once inside of someone’s brain, Lovers can take brain cells and turn them into mush for various uses. First, it can disguise itself as another Stand using the mash to cover itself[5] but can also create a myriad of dummies that aren't the real Stand but can still harm a Stand that has been shrunk to its size.[5]

Although not inherent to itself, Lovers uses DIO's spores to kill its victims. Thanks to its size, it can carry an individual spore inside someone's brain[4] and then feed it with brain cells in order to make it grow and eventually destroy the brain as it did with Enya's.[7] 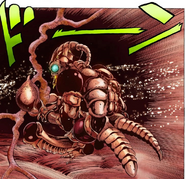 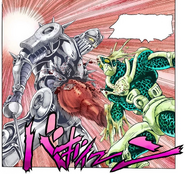 Lovers hidden between it's many clones 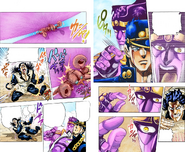 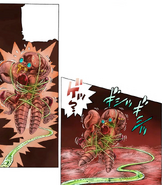 Hierophant Green's string wrapped around Lovers, preventing it from moving 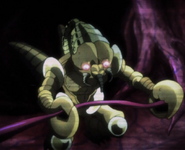 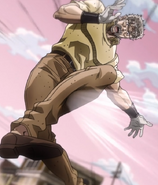