Luca is a member of Passione who antagonizes Giorno Giovanna over a supposed mafia tithe, but gets put into a coma by Gold Experience's power and later dies, prompting Bruno Bucciarati to investigate Giorno.

Luca is a young man of average height and slim build.

He has straight, tan hair, which covers his forehead in two inverted triangles. His right eye perpetually tears, and has a short, horizontal scar under it; both due to a knife injury from a past feud. His condition inspires his nickname and forces him to constantly wipe his eye with a handkerchief.

He wears slim, dark pants and a dark deep-necked top, and a tan coat with a print of light flowers.

He carries a shovel with the initials "S.P.Q.R." engraved in the metal. The SPQR may stand for "Senātus Populusque Rōmānus," which translates to "The People and Senate of Rome" and references the ancient Roman Republic.

Despite a potentially pitiable appearance, Luca is ruthless, threatening Giorno Giovanna for money, refusing to listen when he adamantly claims to have none. Narancia Ghirga comments that he was generally mean to others and that he sold drugs to children.

He has no known Stand, but uses a shovel as a weapon instead.

Luca is introduced following Giorno and demanding protection money for being able to swindle tourists and take money from them. When Giorno refuses on the grounds that he has none, Luca threatens him with his shovel and then orders him to kill the seemingly random frog he transmuted from Koichi Hirose's luggage. Giorno refuses again, and a fed-up Luca attacks the frog with his shovel, only to have the attack rebound upon him. This leaves him with an indentation in his head, matching the shape of his shovel. After that, he didn't regain consciousness, staying in critical condition.

This was later revealed as a lie, as Bucciarati tells that the Boss believed there was no point in keeping him alive. His fingers and eyeball were then used as part of Bucciarati's scare tactics during his interrogation of Giorno. 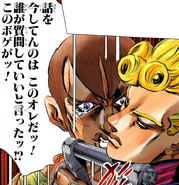 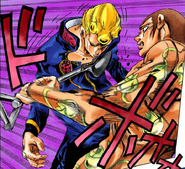 Hitting Giorno and the frog on him

Luca's crushed skull
Add a photo to this gallery

Retrieved from "https://jojo.fandom.com/wiki/Luca?oldid=382089"
Community content is available under CC-BY-SA unless otherwise noted.