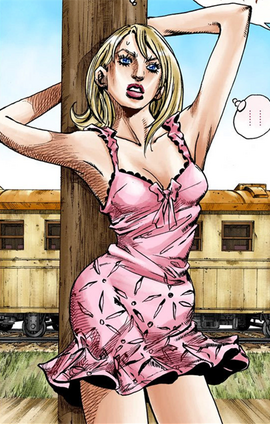 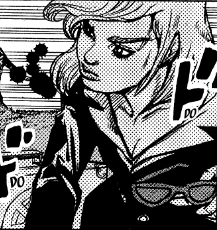 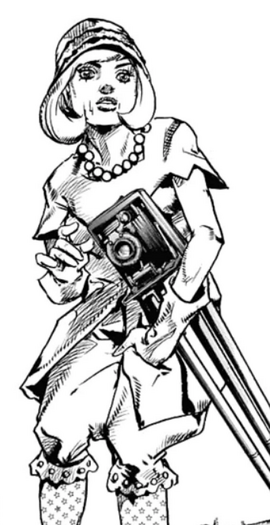 Lucy in the Sky with DiamondsW (Beatles Song)

Ticket to Ride (via Saint's Corpse)

Lucy is the wife of the Steel Ball Run race promoter, Steven Steel. She eventually discovers Funny Valentine's plan for the race and, fearing for her husband's safety, decides to cooperate with the Joestar Group.

She grows up to work for the Speedwagon Foundation specializing in botany and germaophology, investigating phenomena such as the corpse and the locacaca.

Lucy is a fourteen-year-old girl of average height and build. She has light, medium-length hair and an outfit generally consisting of a dress and striped tights. She also wears arm warmers and tall boots, both adorned with circular decorations.

Later, after she is kidnapped by Funny Valentine, her outfit is simplified to only a dress and pair of pumps, and her hair is slightly longer than before. In SBR Chapter 95, Lucy is seen wearing a hood, while also regaining her arm warmers and boots but without any tights underneath.

In JoJolion, we see her 3 times, twice in 1901, and again in 1941. In 1901, she is a young adult, wearing a dark suit and sunglasses, carrying a briefcase, in 1941, she is an old woman, wearing a pearl necklace and a hat and leggings with a star pattern resembling Johnny's hat.

Lucy is an intelligent, gentle and courageous girl despite facing many dangerous situations.

Already apparent in her childhood, Lucy's kindness pushed her to talk to a then derelict Steven Steel, being the first person to support him in his idea of organizing a horserace and also suggesting that it had an enormous scale by making it go across the United States and having a prize in the millions[5]. When Steven repaid her kindness by preventing the mafia from taking her away, Lucy was deeply grateful to Steven, developing a deep relationship with him although it would remain platonic despite everyone else's bias[6].

Lucy isn't shown interacting much with other people, usually being rather withdrawn compared to Steven's bombastic public persona. However, she is the only one who knows about his moments of doubt and sadness and during them encourages her husband[7]. When interacting with other people, Lucy usually acts polite and rather meek.

As Steven's wife, Lucy is extremely loyal to him and her every action during the course of the Steel Ball Run is performed in order to protect him from danger. As such, despite being a frail and Stand-less person, Lucy constantly throws herself into dangerous actions without hesitation. Not only does she infiltrate several well-protected facilities in order to undermine Funny Valentine[8][9], she also has several perilous encounters against Stand Users such as Blackmore[10], Mike O.[11] or even Diego Brando[12], all of whom try to kill her. She also plainly rejects Mountain Tim's advances, stating her pride in being Steven's wife[13].

Although she is prone to nervousness, Lucy is also an extremely resourceful woman, being adept at tricking people or performing other tricks to escape notice. She knows lip-reading[14] and is a competent actor, which in conjunction with her status as the main promoter's wife, allows her to access several usually secure places. Even on the brink of capture or worse, Lucy can think of ways to escape using all available tools and allies. Lucy is ultimately the one who defeats Diego Brando from another dimension by bringing the base world's Diego Brando's head to him, killing him in spite of his formidable Stand[15]. Despite her gentle nature, Lucy also doesn't hesitate to fire at Blackmore[16] or stab Valentine[17], showing a hidden ruthless side to her.

See also: Ticket to Ride
Funny Valentine identifies Lucy as compatible with the Saint's Corpse and catalyzes a merger and metamorphosis between the two. A temporary stand is created after the corpse fuses itself with Lucy, gathering inside her and taking over her bodily functions. While enacted, the stand provides divine protection, which Funny uses to his advantage during his fight with the protagonists.

Lucy is a lip reader, enabling her to spy on people and determine what they are saying purely through lip movement. It allowed her to know about the secret message Ringo Roadagain sent to Valentine and intercept it before the President.

Lucy lived in a family of six siblings and was the second eldest of the bunch. Her father, Adam Pendleton, was a farmer who owned a small land in Oklahoma. Lucy's mother, Alice, died at age thirty-seven when Lucy was only twelve, after which the family fell into misfortune. Lucy's father would later contract debt from the mafia and, being unable to bear having his land or eldest son taken from him, offered Lucy to them instead.[1]

However, sometime prior to the event, Lucy happened to cross by Steven Steel on the streets, which at the time he was broke and drunk. She overheard him mumbling about his plan for the Steel Ball Run and gave him the inspiration to hold it. Before she could be handed over to the mafia Steven tracked down Lucy, and upon hearing her predicament, stepped in to repay the favor he owed. Lucy's father was living in slight denial about what would actually happen to Lucy once the mafia took her, believing that she would just become a typical servant, but Steven made it very clear to him that prostitution was the only possible option. To save Lucy from working as a prostitute Steven asked Lucy's father to tell the mafia that Lucy and Steven were married and she had already been defiled by him. Despite her father's objections, calling Steven a pervert, he eventually relented, and warned the mafia as he was asked.

Indebted to the man, twelve year old Lucy Pendleton tells Steven that she "doesn't mind", and could be his "real wife" someday. Steven denies this firmly, and reassures the young girl that he won't ever lay a hand on her-- asking only that she spare him the trouble of "her future boyfriend" being a mafia member.

In the years leading up to the Steel Ball Run, their relationship is said to have developed into an intense and platonic bond of trust, similar to a good friendship.

As Steven Steel's wife, Lucy doesn't involve herself in the race, but nonetheless accompanies her husband to provide him moral support. During the 3rd Stage, she eavesdrops on President Funny Valentine talking about the Saint's Corpse and discovers the true purpose of the race.[18] While keeping an eye on the president, she foresees the government eventually killing Steven, prompting her to steal the coordinates to the Corpse Part near Kansas City. She is noticed, but barely escapes the government building with the help of Mountain Tim. She is followed, however, by Blackmore, one of Valentine's Subordinates.[19]

Lucy reaches the location of the Corpse Part and digs up the Spine, but Blackmore soon catches up with her. At this point, a manifestation of the Corpse's power appears, allowing Lucy to shoot Blackmore and escape toward Gyro Zeppeli and Johnny Joestar. The duo manage to finish off the agent and persuade Lucy to hinder Valentine by stealing his Corpse Parts[20].

As the investigation on the infiltrator closes in on her, Lucy and Hot Pants decide to cooperate and infiltrate Valentine's current residence, but ultimately fail to steal his Corpse Parts. Thanks to Cream Starter, Lucy disguises herself as the president's wife, Scarlet Valentine, who was killed during the infiltration.[21] However, Lucy is quickly discovered by Funny Valentine who tries to rape her, causing Lucy to blow her cover and attack the President in self-defense. While running away from the president, she stumbles upon the stolen Corpse parts and becomes pregnant, discovering the Corpse's head in her womb.

After she is impregnated with the Corpse's head, she later absorbs all the other Corpse parts. Afterwards, she begins to metamorphose and apparently gains a Stand power. However, she mostly remains unconscious, with Funny Valentine using her Stand's power to protect himself.

After Funny Valentine is defeated at the hands of Johnny and the completed Corpse removed itself from her body, she is reunited with Steven. However, Johnny notices that the Corpse had just been taken by someone working with Funny Valentine and chases after him to reclaim it. Lucy notices that the horse tracks start from the hole Funny Valentine left in his wake and puts together that the thief is in fact Diego Brando from another dimension, whom she plans to confront at the shelter that was made to house the Corpse should Johnny fail to retrieve it first. Remembering what Valentine said about the effects objects from one dimension meeting itself, she uses the base world's Diego Brando's severed head to defeat him.

During the years after the Steel Ball Run, Lucy Steel become a Speedwagon Foundation agent tasked with protection of the Saint's Corpse. In chapter 22, Lucy is briefly shown alongside several other agents in the flashback explaining Johnny's fate, and is said to have been sent to Morioh to retrieve the Saint's Corpse in the wake of Johnny's death. During the explanation of the biology of the Rock Humans in chapter 99, it is mentioned that Rock Humans congregate to places of special power, including the Devil's Palm and the ground of Morioh. As the Devil's Palm is mentioned, an image of Lucy in her younger years is shown, and as the ground of Morioh is mentioned, Lucy is shown in a dark suit and sunglasses with a Speedwagon Foundation briefcase, turning away from the lone pine tree behind the Higashikata house.

In chapter 109, Lucy appears as an old woman, returning to Morioh in 1941, this time to investigate the orchard on the Higashikata Estate. She confirms to a young man she's asked to help her, Fumi-Kun, that she is an employee of the Speedwagon Foundation, saying she specializes in botany and germaophology. She mentions to him how she is single. She says she has come investigating the locacaca, suspecting the estate to be like the Devil's Palm. Fumi-kun warns her of a phenomenon called the "Radio Gaga Incident" in which people on the estate start talking to themselves, walking out into the street, take off their clothes, and disappear. After her driver succumbs to the incident, Lucy finds herself attacked by a possible enemy stand user hiding inside the guard rail.

Lucy Steel appears a stage hazard on the ATLANTIC OCEAN stage as Lucy Steel's Ticket to Ride grants a full Heart Heat Gauge for whoever reaches it first. 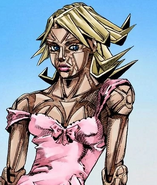 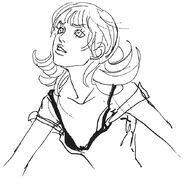 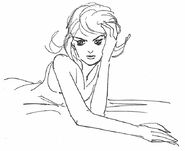