Magenta Magenta[1] (song by SOUL'd OUT)

SBR Chapter 62 - Dirty Deeds Done Dirt Cheap
The character featured in this article is commonly referred to as "Magenta Magenta".

Magent Magent is one of Funny Valentine's henchmen. Partnered with Wekapipo, he attacks Johnny Joestar and Gyro Zeppeli during the 6th stage for the possession of the Saint's Corpse's Legs. Magent is a Stand User, who wields the indestructible 20th Century Boy.

Magent is a slender man of above-average height and dark curly hair. Outside a bolero hat, his attire generally consists of what appears to be a thick quilted stud jacket, accompanied by long sleeves, finger-less gloves, a fur collar and a single stud-embedded cravat.

Later on, he is given a noticeable scar on the left side of his face after his bout with Johnny and Gyro.

Because his Stand is entirely defensive in nature, Magent Magent carries firearms with him. Against Johnny and Gyro, he wields a shotgun, was shown to used a pistol with a silencer for quiet assassinations and was seen wearing an explosive belt.

Magent Magent is presented as an affable and genial henchman to Funny Valentine, trying to bond with his new partner Wekapipo through idle chat or questionable jokes. However, he is quickly exasperated by Wekapipo's gloomy attitude and comes to hate him for leaving him behind in the cold.

In contrast to Wekapipo's more dignified manners, Magent has several bad habits such as licking his own snot, or is quick to express nervousness or frustration during his battles. Magent's unprofessional behavior also causes him to botch most of his actions, such as when he wastes time taunting and threatening Wekapipo during their battle and allows the latter to counterattack and win.

Magent Magent supposedly has a nasal, gravelly and thus irritating voice. This is represented by his lines tending to be written phonetically rather than the more usual style.

Magent Magent has a fondness for airplanes, marvelling at their potential for crossing great distances in a short time. After being left for dead in the frozen wilderness, he also complains that airplanes weren't invented earlier so that his wounds could be treated earlier.

Magent Magent can summon 20th Century Boy in order to become invulnerable to all harm, including explosions and drowning, as long as he adopts a kneeling position and puts his hands on the ground. His Stand's power maybe very strong but it does have one major drawback, while activated Magent Magent is rendered completely immobile and cannot move again until he deactivates it.

Nothing is known about Magent Magent's past, except that he was hired by Funny Valentine at some point prior, or during, the events of the Steel Ball Run race. He was eventually ordered to eliminate Johnny Joestar and Gyro Zeppeli, alongside a fellow subordinate of Valentine's, Wekapipo.

When first seen, Magent Magent is alongside his partner in crime, Wekapipo, waiting to ambush Gyro and Johnny. While lying in wait, nearby to a frozen river which the protagonists must cross, his disgusting habits and constant complaining about not being able to use more modern technology are noted by his partner. Upon spotting Johnny and Gyro, the two assassins stage their ambush in a pincer attack and a fight ensues. After Wekapipo delivers the first strike he reveals himself from hiding, he quickly shows his capabilities by disabling Gyro's steel balls with his defensive Stand 20th Century Boy. Due to the purely defensive nature of his Stand, Magent is forced to deactivate his ability and resort to conventional weapons such as guns to eliminate his targets, an opening Gyro takes advantage of during their fight. After briefly getting carried away, Gyro is able to outwit Magent and causes heavy scarring to his face in the form of a large gash over his left eye. Figuring him for dead, Gyro and Johnny leave to continue their race. Wekapipo also soon leaves him too after being defeated, under the same assumption Magent was dead, and failed to confirm his death for himself.

Magent is later shown to have been alive as he had, in fact, merely been faking death. In his long trek back across the frozen river he is aided by Diego Brando, another racer in the Steel Ball Run and fellow associate of Valentine. Magent was apparently able to overhear the conversation between the protagonists and Wekapipo following their battle, and with the details he gathers he then sets out for revenge by trying to kill Steven Steel.

He attacks Steven while in his carriage, but before he could deal him fatal injuries he is surprised by Wekapipo's sudden appearance, a fight then breaks out between the two former comrades. During their fight atop Steven's runaway carriage he wraps himself with dynamite in an attempt to blow Wekapipo up, protecting himself with 20th Century Boy's ability. The fight continues with both parties being blown into the nearby Delware River, where Wekapipo then uses debris from the destroyed carriage to tie up Magent and make him sink. He activates his Stand once more to save himself from drowning, but because of his Stand's effect to leave him immobile, he realizes that he must deactivate it to untangle himself. However, Magent also recognizes he would likely drown within the time it would take to do so. He chooses to remain with his Stand active and hopelessly await rescue by Diego.

Eventually he "stops thinking" as neither Diego, nor anyone else, comes to save him, leaving Magent essentially comatose at the bottom of the river. It is unclear whether his Stand has the ability to make him immortal per say, so his ultimate fate unknown. 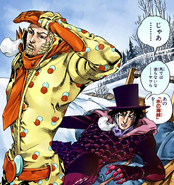