Mannish Boy is an evil genius baby and Stand user in DIO's service. He tries to murder the Joestar Group inside the nightmare-world of his Death Thirteen.

Mannish Boy is a dark-complected baby. He has large ears, sharp canines, and wears a headscarf.

Mannish Boy is an impossible genius; able to think like an adult despite being a baby. He is able to defend himself from a scorpion and is even seen smoking. When close to people, he tends to act like a normal baby in order to avoid attention.

He only shows his true personality when his victims fall asleep close to him; allowing him to use his Stand, Death Thirteen. Through the Stand, disturbingly, Mannish Boy speaks easily, swearing and mocking; while still acting childish. He is also rather sadistic in killing his targets, prone to fits of maniacal laughter (written as a childish "hehehe") and boasting, though his overconfidence can betray him.

Mannish Boy may be one of the most sadistic and disturbing characters in the series, showing no respect for human life, and enjoying torturing his victims instead of killing them outright, despite being only a baby.

Mannish Boy's Stand is Death Thirteen, a clown-like Stand which can pull the consciousness of its sleeping victims into a dream-world where it has absolute control and where they cannot summon their Stands, then murder them with impunity.

Precociousness: Demonstrating physical skill also unusual for his age, Mannish Boy is dexterous enough to kill a scorpion with a safety pin. Moreover, he is unusually intelligent for his age, as he's able to speak and have coherent thoughts, despite being only a baby.

The stand represents the Tarot Card, DeathW, though it represents much more than physical death. It can represent an end, such as how the Crusaders considered ending their relationship with Noriaki Kakyoin because he suggested Mannish Boy was trying to kill them. It can also represent an increase of self awareness, as Kakyoin himself doubted Mannish Boy was a Stand User until the words "Baby Stand" were carved into his arm, and believed he was going insane when all proof of the baby's intent seemed to vanish.

Mannish Boy was a baby that was given to the Joestar group by a woman, claiming that they needed to find his parents or he will be alone in the world. They reluctantly agree, without knowing the woman was actually scared of him and that the baby was a Stand user.

Onboard an airplane, Mannish Boy uses his Stand to continuously attack Noriaki Kakyoin in his dreams, attacking the others when they also fell asleep. Kakyoin's violent movements in his sleep in response to the attack ended up downing the plane. As no one remembers what happened once awaken, everyone deemed Kakyoin crazy when he began suspecting the baby to be a Stand user.

He eventually found a way to remember the dream by carving a message in his own arm with a knife while dreaming. Polnareff knocked out Kakyoin because he was convinced that Kakyoin had gone crazy due to the stress he was under. However, he had been knocked unconscious while he had Hierophant Green out which allowed Kakyoin to use his Stand inside the dream world to defeat Death Thirteen. It also meant Kakyoin could remember the dream upon awakening. After the Stand is defeated and taken control of by Kakyoin, Mannish Boy is told that they are going to leave him in a nearby city where his mother should be around, from there he should return to his parents and stop mocking adults.

Kakyoin teaches him that lesson forcefully by mixing some of Mannish Boy's excrement into baby food. Naturally, Joseph and Polnareff, who are clueless about this and believe Mannish Boy to be hungry, decide to feed him the contaminated food, forcing him to learn his lesson, while Kakyoin acts like nothing had happened.

The events from Death Thirteen occur in a different way. Unlike the printed storyline, in the game Mannish Boy attacks the group from inside a plane en route to India.

Mannish Boy appears only in Story Mode cutscenes; placed before and after Kakyoin's fight with Death Thirteen.

Death Thirteen's Nightmare Dream world where the Joestar Group was trapped, is a playable stage in the game. There is a stage gimmick where Death Thirteen will hunt your character. 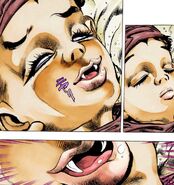 Showing his evil side

Killing a scorpion using a clothespin

Mannish Boy hides the scorpion inside his mouth from Kakyoin

Mannish Boy eats the meal including his feces 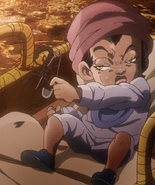 Killing a scorpion using a clothespin

Mannish Boy hides the scorpion inside his mouth from Kakyoin

Mannish Boy rejects the meal including his feces 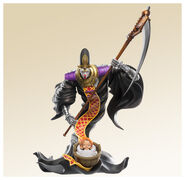 Mannish Boy and his Stand in Heritage for the Future