Mariah is one of the Egypt 9 Glory Gods. She separates the group in LuxorW, and attempts to take out Joseph Joestar and Muhammad Avdol using her magnetism inducing Stand, Bastet, while Alessi confronts the rest of the Joestar Group.

Mariah is an extremely attractive, long-legged woman with dark skin and short, light-colored hair. Her main attire consists of a miniskirt and hood, along with gloves, dark pantyhose, bow-knotted leather shoes and sunglasses on her head. Despite her revealing outfit, she conceals an impressive arsenal of bolts, screws, knives and other metal objects to throw at her magnetized victims. Her design in the anime shows off her midriff contrary to the manga.

Mariah comes off as a calm, cool-headed person. However, she easily loses her cool whenever things don't go according to plan. She contorts her face and bites her lip comically when she is upset or uncomfortable. She also has a very distinctive laugh, which she does when she has her opponents helplessly trapped in the magnetic power of her Stand. Mariah also seems to demonstrate an attraction towards older men, as she mentions that Joseph is very sexy and that she would have been his lover if it were not for Dio Brando being more attractive.

Bastet takes the form of an electrical outlet which magnetizes whoever touches it, causing metallic objects to be attracted to them.

Mariah magnetizes Joseph and Avdol with her Stand, Bastet, attracting metal upon them and even into each other, giving them all sorts of difficulties. During a very powerful display of tactics, she attempts to get Avdol and Joseph run over by a train and even electrocuted. However, the two manage to outsmart her by maneuvering her in between them and then having their metal-cluttered bodies slam into her, fracturing all the segments of her bones in her body and deactivating her Stand. She is later hospitalized and is unable to fight anymore because of her broken bones.

Mariah is one of the boss enemies in the game. The events from her arc appear in the game with one differing detail—instead of fighting alone and confined to Joseph and Avdol, Mariah attacks the whole group alongside Hol Horse.

Mariah makes her playable debut on the Capcom game, being included in the second version of the game. She appears as a playable character with a style based on ranged traps.

Her game style is focused on middle-long range, keeping the enemy away with her moveset. Even without an active Stand, her Bast no Jiryoku, when activated, instead of summoning Bast, will place a magnetism-trap on the screen (always near her). If the opponent gets hit by this trap, their "magnetism" level will rise one level (with 8 being the maximum), making all Mariah's attacks stronger. She's one of the only characters in the game to fight at middle-long range, the other being Hol Horse.

Most of her moves are based on the objects she uses in the fight against Joseph and Avdol, such as knives, forks and electrifying energy cables. During her first super move, she uses the magnetism on the opponent to attract the screws, nuts, and bolts hidden in her bra and damages the enemy. During her second super move, she performs a rising uppercut on the opponent, launching them into the air and attracting a lot of metal objects, causing massive damage. It ends with a car smashing the opponent (the same car that defeated her in the story).

Mariah is one of several characters from Part 3 to possess a Metal Striker. Her FINISH MOVE makes several metal items (such as hammers and screws) attack the opponent, followed by a giant car coming in to crush them (not unlike her method of special attack in the Capcom fighting game).

Mariah was confirmed for the game alongside Avdol.

As a Stand User, Mariah is one of many characters with wildly varied abilities that grant her uniqueness in battle. Instead of the conventional Normal Attacks that take the form of melee combos, Mariah will throw out a metal wire that paralyzes opponents.

She is paired with Esidisi in the Eyes of Heaven Tournament, defeating Rudol von Stroheim and Okuyasu Nijimura in the first round, and then Narancia Ghirga and Diego Brando in the second. In the semifinals, they are eliminated by Jotaro Kujo and DIO in the first round.

Mariah with DIO and Midler from JOJO A-GO!GO! artbook 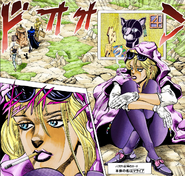 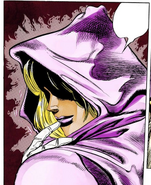 Mariah giving a taunting smirk in front of Joseph

Mariah's appearance from behind

Mariah being retained by Hermit Purple

Mariah's crushing defeat at the hands of Joseph & Avdol

Mariah, confident that she'll succeed in her mission

Mariah's appearance from behind

Mariah keeps her distance from Joseph and Avdol

Mariah smiles as Joseph and Avdol get stuck on rails

Mariah laughs, thinking that Joseph and Avdol have died

Mariah unleashes nuts and bolts from her shirt

Mariah runs away from Joseph and Avdol

Mariah cuts some power lines which fly towards Joseph

Mariah standing in front of Joseph

Mariah's crushing defeat at the hands of Joseph and Avdol

Mariah's portrait from Heritage for the Future

Mariah in Heritage for the Future

Comedic face in Heritage for the Future

Mariah using a special move in Heritage for the Future.

Mariah as seen in Eyes of Heaven (PS3/PS4)

Mariah using her special attack in Eyes of Heaven PS3/PS4